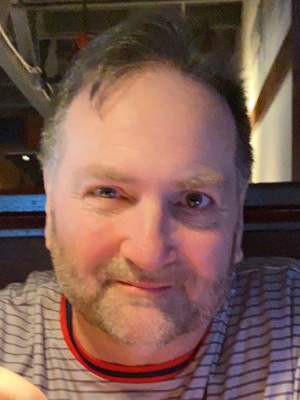 Geno was born on January 22, 1961.  He was born in Cleveland and raised in Macedonia.  Geno graduated from Nordonia High School in 1979.  He went to trade school for commercial art and worked for his fathers’ business (Expo Signs & Displays).  Geno also served as a Youth Director at the Northfield Presbyterian church.  Following his love for fishing, he moved to Port Clinton and ran his fishing charter boat (Rod Bender) on Lake Erie.  Geno spent many summers with his nephews (Vincent, Brandon and Dominic) on the Rod Bender where he gave them the opportunity to be “first mate” which ultimately led them to share the same love for fishing. Geno and Mary Ann married and moved to Texas where he studied for his Captains’ license. This achievement named him “Master” of a Scientific Sea Vessel.  He and his wife worked and traveled by sea to many countries, for months at a time. This is how he became known as “Captain Geno.” For the past 6 years, Geno and Mary Ann resided in Florida and lived right next door to his parents Robert and Mary Lee. Geno, alongside his devoted mother, took the selfless responsibilities in the caretaking of his sickly father Robert (Yukon Bob).  Geno’s love for the open water and casting his rod, gave him “peace” during his downtime.  He also enjoyed watching the Browns and hanging out with his best friend of 48 years, Randy Cotrill. He was an avid reader and spent countless hours studying God’s Word. Geno will be remembered most for his kind heart.  He was selfless, funny, and never too busy to help a family member or friend in need.  His glorious smile proved his happiness, and his eyes were the portal to his heart.  Truly devoted to his faith and family, he will be missed Forevermore.  #seeyousoon #didntseethisonecoming

In lieu of flowers, contributions may be made in memory of Geno to The Salty Dawg Saloon. Cremation by DeJohn Crematory. ALL SERVICES PRIVATE.  Arrangements by THE DeJOHN Funeral Home & Crematory of Chardon (formerly Ritondaro).

Contributions may be made to The Salty Dawg Saloon here

Offer Condolence for the family of Eugene “Geno” Majni

We are pleased to provide for you this grief video series by Doug Manning titled The Journey of Grief. His presentation about the END_OF_DOCUMENT_TOKEN_TO_BE_REPLACED