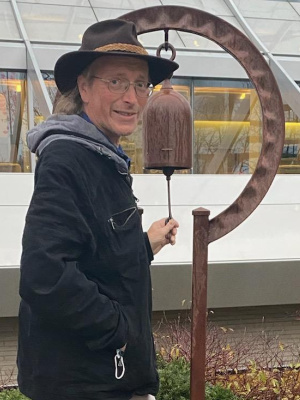 He was born February 11th, 1964 at St. Luke’s Hospital to Juliana Mary and James Joseph Kascsak. In January of 1970 Andrew’s family moved to Lyndhurst, OH. Andrew grew up in his Roman Catholic faith starting with St. Henry Church and finishing his church affiliation with St. Clare Church. With his beliefs he attended St. Claire elementary school from 1st to 8th grade. Participating in cub scouts and boy scouts. Andrew continued his education onto Benedictine High School, his father’s alma mater, on East Blvd in Cleveland OH. Upon graduation Andrew went to work at Cleveland Electric Laboratories, originally located on St. Claire Ave in Euclid OH.

He joined a group called ‘Buck Skinners’ which was a group of predominately guys whom lived off the land in weekend gatherings. No use of electric tools or anything of this century. The clothing was hand sewn and food cooked over an open fire. Lumber was from felled trees and coffee was served black from the enamel pot. Andrew brought random cut offs of 2×4’s pieces to his first outing thinking it would be helpful and was teased always after that his nickname was ‘Pilgrim’

Summer of 1996 he met the love of his life, Deborah Goodluck, who he engaged Valentine’s days of 1997 and wed later that year. They settled in Cleveland Heights Ohio and welcomed their children Dominic James and daughter Caitlyn Jessica.

Andrew had an extreme love of gardening. As a child he built/installed all the flower beds and gardens in his childhood home. He installed a koi pond complete with lilly pads and koi. Each fall the koi came into the basement to live the winter in an aquarium.

The family home was always full of aquariums usually one had fish, but the rest were frogs, or lizards.

A loving and caring man, who dedicated his life to his family and supporting them. Spending time with his children and helping them excel in their hobbies. During his final months in this life he was surrounded by family, expressing their love and ensuring his comfort, before he entered his final resting place. “We love you dad, rest in peace”.

Contributions in memory of Andrew suggested to The Animal Protective League.

Mass of Christian Burial Saturday, Sept. 11, 2021 at Gesu Catholic Church at 11 AM. Reception following the Mass. Committal prayers Monday, Sept. 13 at All Saints Cemetery (Northfield) at 11 AM. Family will receive friends to pay tribute and celebrate the life of Andrew at THE DeJOHN-FLYNN-MYLOTT FUNERAL HOME OF SOUTH EUCLID, 4600 MAYFIELD RD. (just East of Green Rd.) SATURDAY MORNING FROM 9 AM – 10:30 AM.

Offer Condolence for the family of Andrew James Kascsak

We are pleased to provide for you this grief video series by Doug Manning titled The Journey of Grief. His presentation about the END_OF_DOCUMENT_TOKEN_TO_BE_REPLACED