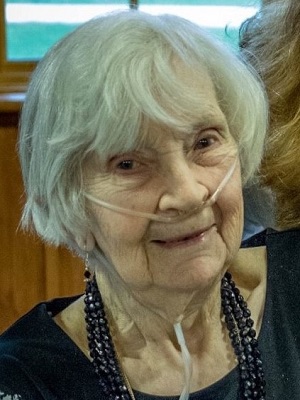 Born on November 20, 1925, and raised in Cleveland, Ohio, Bea, affectionately known as “Beazy” to immediate family, had for the past 62 years lived in Newbury, Ohio.  A steadfast parishioner of St. Helen Catholic Church, her faith and church were cherished parts of her life. She relished many friendships made through participation in Bible Study, Book Club, and various other school and parish activities throughout the years, including adopting an abandoned kitty (and favorite child) “Miracle Mimi.”

Well-known as an accomplished knitter, Bea’s attitude and aptitude towards knitting reflected her approach to life in general. She could take any circumstance or situation, thoughtfully puzzle it out, untangle the details and turn out a success.  As for the actual knitting, many of her items were gifts to family and friends that all understood would first be entered into competition at the Geauga County Fair. That made them doubly special when finally received as gifts, as they almost always had a ribbon attached–often blue–and in at least one case best of show.

Her adventures in cyberspace were worthy of a TV series.  In relatively short order, she evolved from nervously piloting her PC to mastering her laptop, Kindles (she had at least four, though we suspect she took one with her) iPad, and iPhone.  Along the way she charted knitting patterns, adapted/digitized her bookkeeping skills, made business cards, birthday banners, wedding programs and countless other computerized creations. Through the internet she monitored her beloved Cleveland sports teams (on multiple devices simultaneously), the weather wherever her children were, news, Facebook, and of course, Sunday Mass anywhere.  It became common to find her climbing virtual branches of the family tree when Ancestry became a hobby. A lover of reading, Bea had an Amazonian collection of ebooks. She tucked herself in bed each night with the rosary app playing in her ear, at times forgetting to turn it off in the morning, leaving the Kindle to pray on without her. She was not above calling on tech support, even when encountering a snag while pre-planning her own funeral.

To say she will be missed is an understatement.  She left us with a pattern for a well-lived life.  She stitched us together with her love. She will be forever cherished. 🐝

Contributions may be made in memory of Bea to St. Helen Catholic Church.

The family will be welcoming visitors at Bea’s house, 11829 Music St., Newbury, OH 44065, after the graveside service.

Offer Condolence for the family of Bernice White

We are pleased to provide for you this grief video series by Doug Manning titled The Journey of Grief. His presentation about the END_OF_DOCUMENT_TOKEN_TO_BE_REPLACED