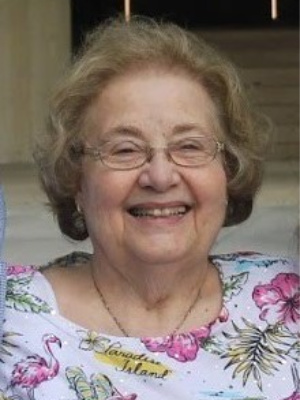 Bonnie was born December 26, 1943 in Cleveland, Ohio, and passed away on March 22, 2020.  She spent her early childhood in the Hungarian neighborhood on Buckeye Road in eastern Cleveland.  Her family later moved to Mayfield Heights in the mid-1950s, where she and Bill (a fellow Hungarian) first met at age 13 at school, happily sharing their high school years together, including her selection as 1961 Homecoming Queen, and eventually attending Kent State University.  She married her sweetheart in 1964, beginning a 55-year marriage.  After Bill’s graduation from KSU in 1965, they moved to the Washington. D.C. area, where Bonnie worked at American University and Bill was eventually drafted in the Army.  This started their adventures in Europe where they traveled, lived in Munich, Germany, and began their family with the addition of their oldest son Chris.

After Europe they returned to Washington D.C. for three years before going home to Cleveland, Ohio in 1974, settling in nearby Newbury Township in Geauga County.  During the following years they added middle son Eric and their youngest child Laurel.  She was a loving homemaker and very active in La Leche League which continued throughout her life helping new mothers with breast feeding advice and support.  Bonnie was also an active supporter of Newbury Schools with the annual school carnival, Afterprom and supporting her kids’ activities.  In addition, she worked outside the home in childcare as a nanny to many wonderful children (Megan, Johnny, Allie and Sam), assisting their parents in family activities and making them a part of her family.  She never stopped mothering and extended that love to everyone she met.

Throughout her life, she treasured family—her two younger sisters, Dot and Perk were extremely important to her and she called them her “other brothers”.  The “brothers” spoke almost daily, shared look-a-like traits and had the same strong Patrick personality from their beloved dad.  She also loved her many nieces and nephews: Kristen, Koco, Tammy, David, Daniel, Billy, Michael, Bobby and Micha — all had a special place in her heart.

She also loved cooking, enjoyed light flower and vegetable gardening and “spoiling” her grandchildren.  Most importantly she was an avid reader throughout life and devoured books with a passion, making weekly trips to the library.  Bonnie is remembered most as a kind, nurturing, sweet, and social woman who was a loyal friend and mother to many.  She was devoted to her family, her faith, and held strong convictions.  Finally, Bonnie was a faithful partner to her husband Bill in life as well as their shared ministry over the years starting at the Calvary Methodist Church in Arlington, VA, to the First Hungarian Reformed Church in Cleveland, Newbury Community Church among others, and particularly during the last 16 years of full-time ministry with the Evangelical Covenant Church.  Over the years Bonnie found comfort reflecting on the times God led Bill and her through, which is best summarized by her favorite Bible verse Jeremiah 29:11 ESV –  “For I know the plans I have for you, declares the LORD, plans for welfare and not for evil, to give you a future and a hope.”  She will be dearly missed by many.

In lieu of flowers, contributions may be made in memory of Bonnie to First Covenant Church, 29400 Chardon Rd., Willoughby Hills, OH 44092.

Offer Condolence for the family of Bonnie Nyerges

We are pleased to provide for you this grief video series by Doug Manning titled The Journey of Grief. His presentation about the END_OF_DOCUMENT_TOKEN_TO_BE_REPLACED