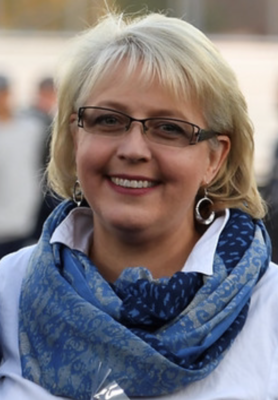 Cherianne Measures was born July 24, 1970 in Barberton, Ohio. She passed away peacefully at her home surrounded by her loving family, Morgan, Evan and Bill on Friday, March 20, 2020. Cherianne grew up in Copley, Ohio, and graduated from Copley High School in 1988.  After graduation Cherianne attended The University of Akron, where she studied accounting and met her loving and devoted husband Bill.   Throughout her youth, Cherianne was an active member of the International Order of the Rainbow for Girls, which she continued to serve by founding Sigma Tau Alpha; the first Rainbow Sorority at The University of Akron.

Once married and for the last 28 years, Cherianne and Bill have lived in Bainbridge Township, Ohio. Cherianne was an active member of Lord of Life Lutheran Church where she guided her children’s faith.   She served as the Fiscal Officer for Bainbridge Township for six plus years and then became the Treasurer for The Geauga County Agricultural Society.  Cherianne was also the leader of Girl Scout Troop #355 for thirteen years. She felt privileged to watch a special group of girls blossom into the women they are today.  But Cheri would tell you, her most important and favorite job was caring for her family. Cherianne was the CEO of raising Morgan and Evan from infants through high school and setting them free to the world as they attend West Virginia University.  She was their teacher, their role-model, and their hero. Cheri rarely missed one of her kid’s sporting events, concerts, plays or activities. She was and always will be their number one fan.

Cheriannne had one of the greatest support teams from doctors to nurses to close family friends. We would like to thank the Kure, Ward, Reid/Rundelli, and Jones families as well as countless others, for their incredible outpouring of love and support throughout this journey. We would also like to thank Cheri’s healthcare teams at the Mayo Clinic and University Hospitals Geauga, with a special heartfelt thank you to Dr. Friedman and Dawn P. Cherianne will be remembered as positive, friendly, witty, kind and devoted to her family and faith. Cherianne will be greatly missed.

Celebration of Life Service will take place at a later date. Arrangements by THE DeJOHN FUNERAL HOME & CELEBRATION CENTER OF CHESTERLAND.

Offer Condolence for the family of Cherianne Measures

We are pleased to provide for you this grief video series by Doug Manning titled The Journey of Grief. His presentation about the END_OF_DOCUMENT_TOKEN_TO_BE_REPLACED