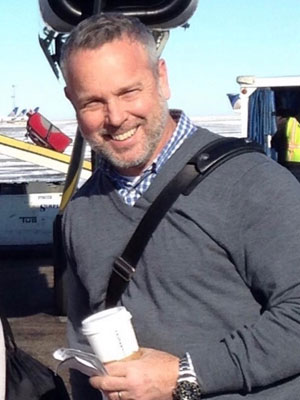 Chris Goodin left this earth on Saturday, April 20th, 2019, after a two year battle with pancreatic cancer. It was just one of the 4 cancer bouts he faced over the past 27 years of his life. He was a father of three beautiful Children; Max 18, and 15 year old twins, Chloe and Charlie. Chris married his college sweetheart, Mindy (Lafler) Goodin and they would have celebrated their 25 year anniversary this June.

Chris grew up in Madison OH, attending Madison High School where he played soccer and tennis. After high school, he attended Baldwin-Wallace University where he was a member of the Sigma Phi Epsilon Fraternity and student body president (91-92) and held many great internships with companies like BP America and Nabisco Company.  After graduating with a bachelor’s degree in 1992, he went to work for The Westfield Company.

Chris discovered a love for helping multiple companies as a lead consultant in the areas of pricing and branding.  Over the course of his career he worked for Accenture, Deloitte & Touche and finally McKinsey & Company, which he joined in 2013.  During his career in consulting he co-authored the book “Pricing and Profitability Management, A Practical Guide for Business Leaders”.  Chris was a Partner Leader in McKinsey’s marketing and sales practice; but his true passion was inspiring and mentoring those he worked with at the firm, as well as his clients, through his undivided time for anyone who needed him.

Beyond Chris’ career he had a true belief in making sure family always came first in his life. He loved coaching youth soccer and lacrosse for many years.  He was always involved, front and center, in so many of his kids sports and activities.  Picking up the game of lacrosse later in his adult life, as well as snowboarding and long boarding, just to keep up with his kids, were a few of his passions in his personal life.  For many years, he enjoyed golf and fly-fishing, and simply just being outdoors. Taking his family on snowboarding trips out west or to New York and to their favorite summer tradition of Bald Head Island were some of his greatest memories.

Music was such an inspiration to Chris as well. Playing Neil Young, James Taylor, Mumford & Sons in the car, in the kitchen or while sitting around with friends was something he enjoyed. Chris always strived to have true joy in his life and in his heart.  His beaming smile, and infectious, roaring laugh was something that everyone knew.

Chris will be remembered as a true warrior who’s passion for life and will to live were so strong and inspirational to so many people.  His journey to fight cancer alternatively and holistically was remarkably brave and helped him to live many more months.  For that he will be forever remembered as being very admirable.

Cremation by DeJohn Crematory. Celebration of Life Service Sunday, April 28, 2019 at 1PM at THE DeJOHN FUNERAL HOME & CELEBRATIONS CENTER OF CHESTERLAND 12811 CHILLICOTHE ROAD (Rt. 306, just south of Mayfield Rd.) where the family will receive friends to pay tribute to and celebrate the life of Christopher immediately following the service until 5 PM. Burial will take place on Monday morning at Evergreen Cemetery.

Offer Condolence for the family of Christopher Alan Goodin

We are pleased to provide for you this grief video series by Doug Manning titled The Journey of Grief. His presentation about the END_OF_DOCUMENT_TOKEN_TO_BE_REPLACED