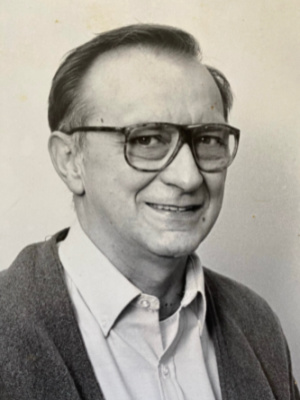 Danny was born January 25, 1934 in Cleveland and lived in Richmond Heights for over 30 years.  He was a long-time parishioner of St. Paschal Baylon Church where he was a member of the Holy Name Society. He was also a member of the Catholic War Veterans, the Utility Workers Union of America, and the Brick Layers Union.

Danny graduated from East Tech High School and went on to serve in the U.S. Army.  He was a lifelong employee and retired from the Cleveland Electric Illuminating Company, where he served as a District Manager.  He enjoyed spending time with his family, including  New Years Day gatherings, making homemade Polish sausage on Christmas and Easter, and visiting with his great-nieces and nephews at the cottage.  But he most enjoyed spending time with his 6 nieces: Peggy, Pam, Patti, Penny, Paula, and Paige.

He was a proud Cleveland sports fan and long-time season ticket holder of the Cleveland Browns.  Danny always remembered being at the 1964 National Football League Championship and at the very first Monday night football game ever – the Browns versus the Jets, at Municipal Stadium. He played football in high school and competed in several bowling leagues.

Danny’s family will remember him as smart, strong-willed, witty, and generous.  He will be missed by many.

Relatives and friends are invited to meet for the Mass of Christian Burial Friday, June 11, 2021 at 10 AM at St. Paschal Baylon Church. Burial following at Calvary Cemetery. Arrangements by THE DeJOHN-FLYNN-MYLOTT FUNERAL HOME OF SOUTH EUCLID.

Offer Condolence for the family of Daniel M. Gallito

We are pleased to provide for you this grief video series by Doug Manning titled The Journey of Grief. His presentation about the END_OF_DOCUMENT_TOKEN_TO_BE_REPLACED