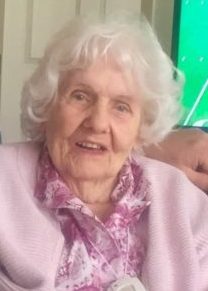 Dorothy was born on July 7, 1920 in St. Paul, Minnesota and died on January 30, 2020 in Cleveland. At a young age, she and her family moved to Cleveland, where Dorothy attended Cleveland Heights High School. Dorothy worked at the ticket counter at the Center Mayfield Theatre where she met her husband, John, who worked there as an usher. They later moved to Long Island, New York and lived there for 36 years. In 2004, they returned to Cleveland Heights. Dorothy was a homemaker and loved the Cleveland Indians. She was such a big fan that her family scheduled her 100th birthday celebration to be at Progressive Field. Dorothy was sweet, caring, frugal and loved attending social functions. She was especially proud of her family and loved welcoming the new babies into the family. Dorothy will be missed by all who knew her.

Contributions may be made in memory of Dorothy to Cleveland Indians Charities OR Chester Historical Society P.O. Box 204 Chester, Connecticut 06412. Cremation by DeJohn Crematory. Celebration of Life Service to be held at a later date.  Arrangements by THE DeJOHN-FLYNN-MYLOTT FUNERAL HOME OF SOUTH EUCLID.

Offer Condolence for the family of Dorothy MacPherson

We are pleased to provide for you this grief video series by Doug Manning titled The Journey of Grief. His presentation about the END_OF_DOCUMENT_TOKEN_TO_BE_REPLACED