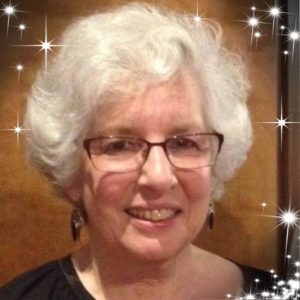 Elaine “Ellie” was born in Cleveland and grew up in Shaker Heights.  She graduated from Shaker Heights High School and attended Ohio University.  When she was 19, while skating at Northfield Plaza, she met Nick, a Canadian hockey player whose professional career had recently ended with injury.  They married when they were 21 and son David followed soon thereafter.  In 1963 they moved to Albuquerque, New Mexico where Bob was born in 1965.  Missing the family and friends they left behind, they returned to Cleveland in 1966, living in Shaker Heights until 1969, then Cleveland Heights where they would remain until 1978.  In addition to raising a family, Ellie was actively involved in assisting Nick with the founding of the Cleveland Heights Hockey League and managing the High School hockey program which culminated in a State championship in 1973.  In 1978 Nick was relocated to Memphis where they lived until 1984, followed by short stints in Charlotte and Baltimore.  When Nick was diagnosed with renal failure, they returned to Cleveland Heights in 1987.  Ellie became the full-time caregiver to Nick, her mother and brother all while she maintained a full-time job with the Reimer Blum accounting firm in Beachwood.  During these years she welcomed her most important and favorite job – “Grammy” to Trevor, Noah and Jack.  Following Nick’s passing in 2010, Ellie became an active volunteer at the Heights Emergency Food Center.  A few years later she was introduced by a mutual friend to George Roby, a sculptor and potter with a terrific sense of humor. The two became partners, happily pursuing their mutual lifelong passion for the arts. When George’s health declined, without hesitation, she again stepped in as caregiver until his passing in December of 2017.   Through George she connected to the Artists Archives and together they curated the works of her mother, Gerte Hacker, which culminated in the exhibition “Working Women: Gerte Hacker and Elise Newman” this past January.  Ellie enjoyed spending time with her many friends and family, going out to movies, the theatre and restaurants, playing Bingo and just checking in on Facebook or with a phone call.

In lieu of flowers, contributions suggested to Artists Archives of the Western Reserve; or to the Leukemia and Lymphoma Society. Private graveside services held at Lake View Cemetery. Family will receive friends to pay tribute and celebrate the life of Elaine on Monday, May 6, 2019 at Nighttown, 12387 Cedar Rd., Cleveland Hts., OH 44106 From 4-8 PM. Arrangements entrusted to THE DeJOHN-FLYNN-MYLOTT FUNERAL HOME OF SOUTH EUCLID.

Offer Condolence for the family of Elaine P. Wren

We are pleased to provide for you this grief video series by Doug Manning titled The Journey of Grief. His presentation about the END_OF_DOCUMENT_TOKEN_TO_BE_REPLACED