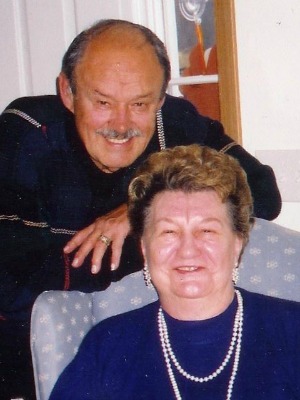 Goldie was born November 22, 1929 to Mary and Frank Huszar. She grew up in the Buckeye Road Hungarian enclave in Cleveland and attended John Hay High School. She married “Bone Crusher” Johnny Gyuran (later Juron) May 29, 1948 and they started Jack’s Donuts in East Cleveland. The business slogan was “Made Right…an Eating Delight” and they lived up to it, producing the best donuts in the nation and always providing service with a smile. John and Goldie built their home in Mayfield Heights in 1954. Their marriage, three children and six grandchildren were also “made right” and Goldie doted on all of them.

Goldie loved bowling, cooking and entertaining and she excelled at all of them. She was the center of every party with her great sense of humor and “assisting” Johnny’s telling of stories and jokes.

Johnny and Goldie moved to Arbor Glen Apartments in Twinsburg in 2007. They enjoyed several cruises and trips south where they made many friends. It was a true blessing for their retirement years and the family thanks Goldie’s niece, Lois, for generously allowing them to stay in her condo at Gulf Shores.

Goldie moved to Rockynol Retirement Community in Akron in 2011 and loved it. Despite a broken hip, she made instant friends and kept the staff at Rockynol on their toes. Her lifelong friends, Dick and Dorothy Kikta and Francie and Sam Parisi were constant pals and poker buddies, and a real blessing to the entire Juron family.

In lieu of flowers contributions may be made in Goldie’s memory to Rockynol Retirement Community of Akron or Alzheimer’s Association.

Entombment following at Whitehaven Memorial Park Cemetery. Family will receive friends to pay tribute to and celebrate the life of Goldie at the FUNERAL HOME THURSDAY 11-1:30 PM.

Offer Condolence for the family of Goldie Juron

We are pleased to provide for you this grief video series by Doug Manning titled The Journey of Grief. His presentation about the END_OF_DOCUMENT_TOKEN_TO_BE_REPLACED