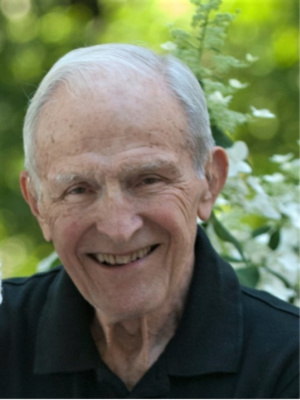 Dr. James Henry Rosenberger, 95, of Willoughby passed peacefully at home into the presence of his dear Lord and Savior on August 10, 2020. Jim, as he was best known, was born the second of four children to Dr. Harry Clifford and Marcia Louise Henry Rosenberger on June 4, 1925, in Cleveland, Ohio. After graduating from University School, he began studies at Yale University but a short time later joined the U.S. Navy and served during WWII in the South Pacific. He returned home and finished his education at the Ohio State University in Columbus, where he earned an undergraduate degree and Master’s Degree in Agriculture, and a Doctorate in Veterinary Medicine, graduating first in his class.

It was in Columbus where he met a beautiful young lady from Oak Hill, Ohio, Anna Grace Herbert. Though their backgrounds could not have been more different, they paired together perfectly in so many beautiful and complementary ways. They were married on September 9, 1951, and enjoyed nearly 69 years of wonderful life together. Jim was widowed for only a short time being predeceased by his beloved Anna by only 82 days.

Jim’s veterinary career spanned more than 45 years beginning in 1951 when he joined a large animal practice in rural Wisconsin near Beloit. He then did a brief stint doing research for Armour Pharmaceutical Company from 1959 to 1961 in Kankakee, Illinois. He finally moved his family of six to the Cleveland suburbs where he founded Hillcrest Animal Hospital in Richmond Heights and later owned and operated Maple Heights Animal Hospital.  Jim’s career achievements were many and varied displaying his multiple talents. He was past president of the OSU Veterinary Alumni Association and the Ohio State Veterinary Medical Association, member of the Christian Veterinary Mission and co-founder and book reviewer for Veterinary Economics magazine.

Though deeply dedicated to his professional career, Jim was a devout man of faith. The Lord Jesus Christ was his fortress, serving his Lord in so many ways. He traveled to Haiti for missionary work and served tirelessly in many influential positions where his keen intellect and judgement were helpful to countless others. He was a deacon, elder and Bible teacher in the churches he attended. He especially enjoyed serving in the prenuptial ministry with his wife at Parkside Church. He participated in the 1972 Billy Graham Crusade in Cleveland and for many years belonged to the Bill Glass Prison Ministry and Crossroads Prison Ministry.

A talented writer and speaker, he was famous for his annual Christmas poems and authored a book, Pause, Pray, Proceed. For many years he had his own radio spot on Christian radio station WCRF in Cleveland called Pause for Prayer relating life experiences with relevant Biblical teachings.  He was also a regular guest on the local TV show Live on Five on WEWS in Cleveland where he offered pet care advice and answered viewer questions.

Jim was an exemplary family man. He was a constant presence for each and every one of his extended family. His enthusiastic support, counseling, everlasting devotion and most of all irrevocable love for his family will forever form a remarkable template for many of his generations to come. He was, indeed, our fortress.

During these times of social distancing due to COVID-19, Jim’s memorial service and burial will be a private family Celebration of Life.  The funeral service will be held at DeJohn Funeral Home in Chesterland, Ohio on August 22, 2020. The service will begin at 11:30am and a live web-stream of the proceedings will be available for friends to watch.  Go to https://www.dejohnfuneral.com and the web-stream will be under Jim’s obituary page. Interment will be at Russell Township Riverview Cemetery.

In lieu of flowers, contributions may be made to the Christian Veterinary Mission, 19303 Fremont Ave. North, Seattle, WA 98133 or www.cvm.org.

Offer Condolence for the family of James Rosenberger

We are pleased to provide for you this grief video series by Doug Manning titled The Journey of Grief. His presentation about the END_OF_DOCUMENT_TOKEN_TO_BE_REPLACED