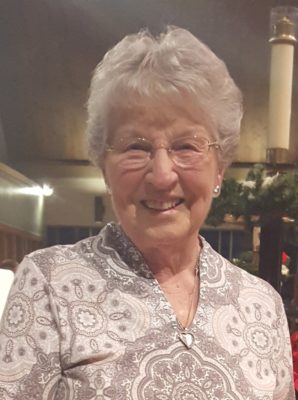 Jean was born on April 2, 1931 in Worcester, Massachusetts and died Wednesday, October 23, 2019 in Richmond Heights, Ohio. She raised her family in Lancaster, Ohio where she and her husband, the Reverend Merrick Danforth, worked together at St. John’s Episcopal Church. Jean later went on to work as a secretary for Frank E. Smith Funeral Home. She and her husband later moved to Lake Helen, Florida. Jean enjoyed knitting, reading, traveling on cruises and watching the New England Patriots. She especially enjoyed learning about her ancestry and even took a trip to Ireland to find some of her relatives. Jean also enjoyed camping in the mountains and along the coast. She will be remembered for being social and faithful, having a good sense of humor, always smiling and being a loyal friend to many. Jean will be deeply missed

Cremation by DeJohn Crematory. Graveside service and burial will take place next to her beloved husband in New Hampshire at a later date. Arrangements by THE DeJOHN-FLYNN-MYLOTT FUNERAL HOME OF WILLOUGHBY HILLS. Online obituary, guestbook, and order flowers at

Offer Condolence for the family of Jean Irwin Danforth

We are pleased to provide for you this grief video series by Doug Manning titled The Journey of Grief. His presentation about the END_OF_DOCUMENT_TOKEN_TO_BE_REPLACED