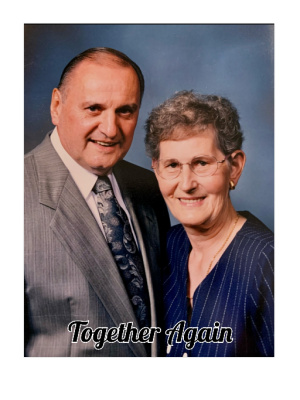 Jeanne grew up on Killdeer Ave in Cleveland, attending and graduating from Collinwood High School in 1948. She worked in the office at Chase Brass until marrying Anthony and starting a family. (She was known as Tony’s first wife Jeanne.) Although he kidded, Tony was absolutely the love of her life. Five years after his death, Jeanne still glowed when she thought of him.

She loved polka dancing and cooking for her boys. She also enjoyed camping.

Jeanne was an independent woman, but she saw the bright side to everything. Remembered as a positive person, she was her sons’ strongest advocate. Jeanne was a devoted wife, mother, grandmother and great-grandmother. Jeanne dedicated herself to her great-grandchildren after the death of her granddaughter. For Jeanne everything started and ended with family.

In lieu of flowers, contributions may be made in memory of Jeanne to St. John of the Cross Catholic Church, Church140 Richmond St. Euclid OH, 44143. PRIVATE Family Mass of Christian Burial and interment at All Souls Cemetery. Arrangements by THE DeJOHN-FLYNN-MYLOTT FUNERAL HOME OF WILLOUGHBY HILLS, 28890 CHARDON ROAD. Online obituary and guestbook at www.DeJohnCares.com.

Offer Condolence for the family of Jeanne E. Stanic

We are pleased to provide for you this grief video series by Doug Manning titled The Journey of Grief. His presentation about the END_OF_DOCUMENT_TOKEN_TO_BE_REPLACED