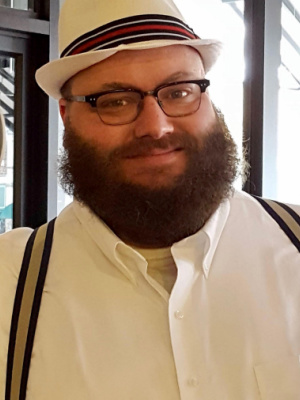 If John Hogsett could have written his own obituary, it wouldn’t be an obituary. It would be a multiple-season series on HBO. The kind he loved. A saga of family and friends—and friends who became family. A celebration of his fanaticism for virtually every sport except maybe Jai-Lai. His passion for technology that started with a Commodore-’64  and a game of “Ducks, Ahoy” and never ended. His recent Christmas wish list included,“ You could write “game for Xbox” on a piece of paper, Mom, and hand it to me on Christmas morning. That will get the point across.” He’d surpassed parental knowhow in so many ways.

John was passionate about music, too. He grew up from the little boy who would cover his ears when singing got noisy and complain, “Too wowd!” into the big man who was a fierce Phish fan and never thought any of his multiple-favorite bands could be cranked up too far. He tried out all kinds of music—always discovering new sounds. He was a master of the playlist.

John loved cars and, like his father, was always all about the newest and the coolest. He was one of the first in Ohio to own a Mini-Cooper. One problem: The car was a standard transmission and John had never driven a standard. His dad got the car home from the dealer and he and John went to a big empty parking lot. After 45 minutes of jerky starts and stops, John said, “I’ve got it.”  He did. He drove home and never looked back. A very big man driving a very small car with a lot of skill and joy.

Sports! John followed all the Cleveland teams, wearing game jerseys for whatever team was in season. And also there was soccer: Somehow John became a soccer fan in his early teens and a supporter of the Arsenal English Premier League team. He got a jersey, of course. And wore it proudly. Since there is no Cleveland hockey team John followed the NHL Blackhawks and wore their jersey for the games. Indy 500? Tour de France? Yep. Yep. Always Browns, of course. Always baseball. He and his dad would go to the old stadium on the spur of the moment to see the team, buying their tickets from scalpers, but he and his mom were at CLE’s first baseball playoff game in 1995 where Tony Pena hit that game winning homerun in the wee hours of the morning.

Most of those games were John & Dad events. On one recent occasion when his mother asked him how Arsenal was doing, John’s response was “Who are you? And what have you done with my mom?” However, Mom ruled the Olympics as the secret-recipe-holder of the traditional menu of the Opening Ceremony: Olympic Chicken & mashed potatoes.

John was a golf enthusiast from his very first games of putt-putt, and he was quick to move up to “real golf.”  Family trips became golf trips to Arizona and the “non-putt-putt” courses of Myrtle Beach. On one of the most memorable of those beach trips, John was behind the wheel—his dad asleep in the back seat and his mom enjoying the ride— when he met a fugitive driver with police in hot pursuit. Head on. In his lane. John moved over calmly, smoothly. Only one person screamed, and everyone, including the fugitive, survived. Another exciting golf excursion for Bill and John and their faithful fan was in Hawaii. On that occasion Bill was driving on a road that had been clearly marked “will void your travel insurance.” On the travel insurance. At least one tire was a bit off the road for a heartbeat, over a drop that was, though quite scenic, apparently bottomless. Two passengers screamed on that trip. And laughed about it somewhat later.

For a man who could take great pleasure in figuring out how stuff works and helping people find what they were looking for, John’s adventures in retail were the perfect fit. From his first job at The Sharper Image, on to Birkenstock. A brief but happy stint at Liggett-Stashower where his mom had the pleasure of having her son put the mail on her desk. Tommy Bahama—in Las Vegas for a couple of colorful years—the opportunity for the cross-country John/Mom road trips in both directions with spot-on playlists both times. Then Orvis back in Cleveland. And then to his years at The Apple Store. Where John used his gift for introducing people to things and ideas that fit their needs. And where he had occasion to tell many people, including his mom, “You are NOT stupid!”  And so often he turned customers—and, always, especially, his coworkers—into friends.

At Apple, he excelled as a sales person in the front of the store, where his enthusiasm was evident both to customers and Apple management. He was promoted to the Apple Genius position that required training in Cupertino for several weeks. He was ecstatic. The experience expanded his horizons and served him well when, later, he transitioned to a Creative position, planning and delivering workshops to customers and Apple store staff. John loved teaching!

He made a lifetime’s worth of friends at Apple

And from his beginning, John was loved. His grandmothers both adored him, their only grandchild. Margaret baked him three different kinds of pie because he “couldn’t make up his mind.” Virginia, took him to fairs and on boat rides and gave him the chance to pet a boa constrictor. They both enriched his life by giving him the best of themselves and making him feel like the center of a very friendly universe. His Aunt Vicky and Uncle Chet completed that circle by being family who also treated him like an adult.

From the beginning, he knew how to be kind, how to have fun, how to teach, how to learn—he was an avid watcher of shows about science, politics, history, the world. And the world of food! One of the last things he wanted to borrow from his mother was the well-worn copies of Mastering the Art of French Cooking.  John Hogsett was brave. Case in point: Second Grade. John needed a little encouragement to deliver a bouquet of flowers to his teacher who was probably his very first crush. But once he got the car door open and had the flowers in hand, John squared his shoulders, raised the flowers like He-Man’s sword, and said, “Miss Rosemary Nagy, this is for you!”

That was John Hogsett.

In lieu of flowers, contributions may be made in memory of John to the Cleveland Food Bank.

A celebration of his life will be announced at a later date.

Offer Condolence for the family of John William Hogsett

We are pleased to provide for you this grief video series by Doug Manning titled The Journey of Grief. His presentation about the END_OF_DOCUMENT_TOKEN_TO_BE_REPLACED