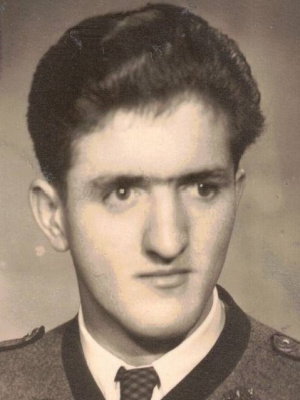 Joseph was born in a German speaking village in Slovenia called Winkel, located in the province of Gottschee.  He immigrated from his home in Austria to the United States in 1956, settling in the Cleveland area. Since the mid-60s, Joseph and Isabella have resided in Willoughby Hills and Willoughby, OH.

Strong in his faith, he was a member of Immaculate Conception Parish before helping build St. Noel Catholic Church, where he became a devoted parishioner.

While serving as president of the E.O.U.V. Club in 1979, he moved the club from Cleveland to a beautiful 10-acre park setting in Novelty, Ohio.  Joseph was also “The Original House Flipper”. He enjoyed finding homes that needed a little TLC, then cleaning & fixing them up for resale.  It was a hobby that often included the involvement and painting abilities of his daughters, much to their chagrin.

Twenty-five winters were spent being “Snowbirds” in Boynton Beach, Florida. There he made many friends, enjoyed mornings watching for manatees at the inlet, and became quite the shuffleboard player. During the months spent back in Ohio, he liked walking in the metro parks and took to gardening flowers at Breckenridge, in Willoughby, his final home.

Joseph will be dearly missed.

Prayers of Christian Burial Monday, February 22, 2021 at 11:30 AM at THE FUNERAL HOME. Burial following at Western Reserve Memorial Gardens.

Family will receive friends to pay tribute to and celebrate the life of Joseph at THE DeJOHN FUNERAL HOME & CELEBRATIONS CENTER OF CHESTERLAND 12811 CHILLICOTHE ROAD (Rt. 306, just south of Mayfield Rd.) MONDAY 10–11:30 AM.

In lieu of flowers, contributions may be made in memory of Joseph to Catholic Charities USA, 2050 Ballenger Ave Suite 400, Alexandria, VA 22314.

Offer Condolence for the family of Joseph Ruppe

We are pleased to provide for you this grief video series by Doug Manning titled The Journey of Grief. His presentation about the END_OF_DOCUMENT_TOKEN_TO_BE_REPLACED