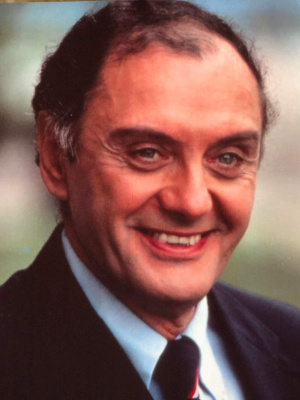 Joe was in many ways the embodiment of the American Dream. His parents, Maflah and Alia (Abood) Nahra, met and married in Cleveland after each immigrated from Aitaneet, Lebanon.  Born in 1927, Joe was the first son, arriving after sisters Evelyn and Essine, and before brothers Victor, Allan and sister Elaine. The family lived in Hough, and Joe attended Dunham primary school  (decades later he was bemused on a trip to the Smithsonian to find his elementary school classroom replicated in a museum exhibit).

Immediately upon graduating from East High School in June,1945, Joe was conscripted into the US army where he served 18 months until the end of the war. His work as a cook’s assistant served him in good stead to very occasionally make a mountain of lentils throughout his life.

With his army service having delayed his quest for higher education, and with the help of the GI Bill, Joe enrolled in Case Western Reserve University, graduating with distinction in 1949, completing the four year course in 2 ½ years by taking evening and summer classes. Encouraged by his parents, who like many immigrants valued education above everything, Joe applied and was accepted to Harvard Law School, where he graduated in 1952.

Throughout his studies and early years as a lawyer Joe continued to work shifts at the Euclid Avenue general grocery store his father had established in 1940. He also became active politically, registering as a Republican. At Chicago’s Republican National Convention in 1960 he met Barbara Hall, also from Cleveland; the two married the following year. The first of their four children, Kirk, was born in 1962, with Paul following in 1964, Carol in 1967 and Joseph in 1969.

After 17 years working as a general practitioner heading the firm of Nahra & Morgan, in 1968 Joe ran his first campaign for judge, losing to Leo Spellacy. In 1969 Joe was appointed to the Cleveland Common Pleas court; he successfully won election to the same court the following year.

As a trial judge he oversaw some high profile cases, including the 1977 trial of former judge Robert Steele. Later that year Joe moved to Probate Court where he served for three years before stepping down for an unsuccessful run for US Congress in 1980. He then spent some time in private practice with Kelly, McCann and Livingstone before being appointed to the Eighth District Court of Appeals in February 1982. He served there for the next 16 years, winning several elections to the seat and serving as Chief Justice from 1987 – 1988.  On the appellate court he issued more than 1,000 judicial opinions. During his career he was the recipient of 12 awards for Outstanding Judicial Service from the Ohio Supreme Court, a court that he occasionally served on.

In addition to his day job, “The Judge” was a leader in the community, particularly in Cleveland’s legal circles and the middle east diaspora. He was for a time the Cleveland director and a National Trustee of St Jude Hospital Foundation. He was also an active member in organizations like CAMEO, which awarded him a career achievement award in 2014. He helped recent immigrants establish businesses and navigate legal contracts, such as for his cousins, who founded Aladdin’s Bakery. It is situated next door to St Maron’s church, the Cleveland home for the many families who migrated from Lebanon, and where Joe’s memorial service will be held May 26.

Joe was extremely proud of his family, including the fact that his three sons all attended law school; his eldest Kirk following in his footsteps to Harvard. He also supported his wife Barbara who began law school when their four children were under the age of 10, and went on to a successful career as a corporate lawyer for TRW.

An avid tennis player in both Cleveland and during annual winter stays in Ft Myers Florida, Joe also enjoyed the occasional round of golf and riding his bicycle. A keen crossword and card player, he usually won at gin rummy throughout his life and always won at solitaire. He also enjoyed the Cleveland Orchestra and Cleveland Institute of Music and musicals such as My Fair Lady.

More than anything, Joe enjoyed telling jokes. There was seldom a topic that came up that he didn’t have a funny story about. His delivery was so good that jokes remained funny even after hundreds of tellings, according to his very devoted wife Barbara.

Offer Condolence for the family of Judge Joseph J. Nahra

We are pleased to provide for you this grief video series by Doug Manning titled The Journey of Grief. His presentation about the END_OF_DOCUMENT_TOKEN_TO_BE_REPLACED