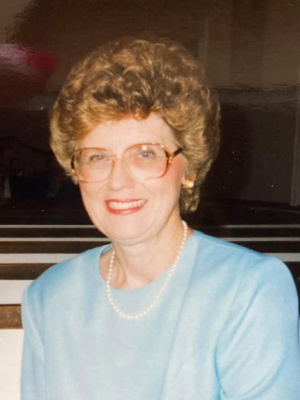 June grew up in Highland Heights in a happy household with her parents Edwin and Rosa, and her sister Diane. June and her sister both attended Andrews School for Girls. June graduated with the Class of 1955, and she maintained lifelong friendships with her Andrews classmates. Upon graduation, June took a position with The Austin Company. After staying home to raise her girls, June went on to work as a rural postal carrier for 25 years.

In 1956, June met her husband Pete at a Methodist Church event in Brimfield, Ohio. They were married in 1958 and enjoyed a loving and lasting marriage of 62 years. Together they had two daughters, Karin and Kristen, and have been devoted grandparents to six grandchildren: Jake, Katie, Emily, Kari, Sarah, and Erin. Over the years, their household was the home to four pets, but Francie remained her favorite.

June enjoyed traveling, sewing, gardening, antiquing, and was a Swanky Swig collector. An annual destination over Labor Day Weekend was the Canfield Fair where she enjoyed poring over the Fine Arts and Floral exhibits and watching the draft horse judging. For 43 years, June and Pete met monthly with three other couples for Bridge Club. Every year, they celebrated New Year’s Eve with a formal dinner at a member’s home and gathered for a summer dinner at a fine restaurant.

June was a member of the Andrews Alumni Association and enjoyed attending the fall alumnae events. June was an active member of Willoughby Hills United Methodist Church. She sang in the choir with her husband, Pete and their daughter Kristen later joined as well.  She attended and assisted with various events, and more importantly, developed many deep and meaningful friendships.

June was very dedicated to her family. She enjoyed spending time with her family playing card and board games, and one of her greatest joys was sharing in both everyday moments and milestone events. Over the years, June attended many Kollmorgen family gatherings and almost every List family reunion.

June was an exceptional cook. She looked forward to cooking for family gatherings and was happy to prepare family favorites. She was known for her potato salad, chocolate roll, and pies (her custard pie was Pete’s favorite). Everyone was in awe of the precision with which she cooked – both her methods and her presentation.

She is remembered for being witty, but in a quiet way. June was hard-working and a bit of a perfectionist; she was also warm, friendly, and always very interested in others. She is described as a friend forever. As one of her grandchildren remarked, “Granny was the purest soul.” She will be dearly missed.

Due to COVID, private family services were held. Celebration of her life to take place at a later date. Arrangements by The DeJohn-Flynn-Mylott Funeral Home of Willoughby Hills.

Offer Condolence for the family of June Mortensen

We are pleased to provide for you this grief video series by Doug Manning titled The Journey of Grief. His presentation about the END_OF_DOCUMENT_TOKEN_TO_BE_REPLACED