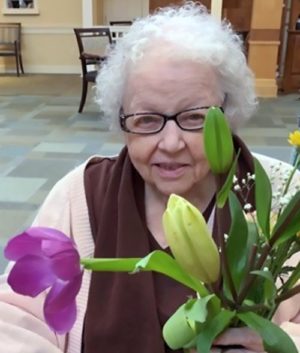 Lucille was born on November 5, 1929, in Medford, Massachusetts, the daughter of Inez and Joseph McFarland. Her family moved to Cheticamp (Cape Breton) Nova Scotia, where Lucille spent her formative years. At age 15, Lucille went to Halifax to finish high school at Mount Saint Vincent Academy. She stayed at the Mount to complete her college education, earning a Bachelor of Secretarial Science and Business Administration in 1949. Following her graduation, she worked as an administrator for the Canadian government and several other prominent business entities in Halifax.

In 1952, Lucille married the late Norman J. McDonald. Norm joined Alcan Aluminum of Canada (Alcan) in 1954. He and Lucille moved to Quebec, and in 1957, their daughter Lesley was born in Jonquiere. Following a short stint in Montreal, Lucille came to the United States. She lived in Atlanta, Georgia, from 1960 to 1968, and Westport, Connecticut, from 1968 to 1976, before moving to Ohio. An excellent cook and decorator, Lucille made sure that each new place become home. Lucille loved “the States.” She embraced the unique experiences of living in so many different areas and meeting new people. Yet, it was her connection to Canada that she cherished. With great excitement, Lucille would plan her yearly trips to Halifax and visit with her brother, Bob, his wife, Honey, sister, Jean and her husband, Tom, her many nieces and nephews, and old friends. She looked forward to driving up to Cape Breton, stopping in Glace Bay to see her brother-in-law, Thomas Alan (T.A.), and his wife, Lena, then going back to Cheticamp to wind up her journey. When she wasn’t in Canada, Lucille looked forward to her Sunday morning phone calls with Bob and Jean to stay current on everyone’s activities. She also loved fashion and followed the current styles eagerly.  An avid reader, Lucille was fascinated with the history of the British Royal Family.

An attentive, loving, and thoughtful mother, Lucille will be deeply missed. Her family is grateful for the compassionate care she received as a resident of Maplewood at Chardon for the past seven years, and in her final days, Hospice of the Western Reserve.

A private service will be held at 9 a.m. on Thursday, May 21, at the DeJohn Funeral Home in Willoughby Hills, Ohio, with a future celebration of Lucille’s life to take place in Halifax, Nova Scotia. In place of flowers, donations in Lucille’s memory to Maplewood Senior Living in Chardon would be appreciated.

Offer Condolence for the family of Lucille Joanne McDonald

We are pleased to provide for you this grief video series by Doug Manning titled The Journey of Grief. His presentation about the END_OF_DOCUMENT_TOKEN_TO_BE_REPLACED