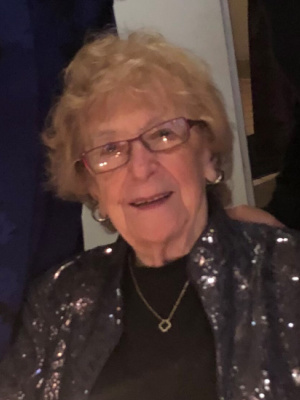 Madeline Mannino (Damaso) was a first-generation Italian American born and raised in Cleveland, Ohio. She graduated from Shaw High School in East Cleveland and enjoyed a few years as a “Pinkerton” guard and a stint as “Rosie the Riveter” during WW II. She and Anthony Mannino married and settled down after he returned from the war and raised three children, Rosemary, Susan and Joseph. Most of the child rearing years they lived in University Heights.

Although she was primarily a homemaker and mother, she worked at a part time job at Sears Catalog. She was able to enlist her incredible social skills to bond with customers, coworkers and anyone she had the occasion to meet. Madeline’s gift to make social connections permeated her life and contributed significantly to her ability to touch all that interacted with her. But her claim to fame was her culinary skills and joy in entertaining young and old. Her home was always filled with delightful aromas and people in and out of her kitchen. Nothing was more important to her than being a mother. She taught her children to have compassion for other people; to pursue education and to value hard work.

Madeline was extremely proud of living until her 100th birthday and reminded all around her of her age. We will miss her dearly and celebrate her long and remarkable life.

In lieu of flowers, contributions suggested to the Children’s Diabetes Foundation at https://www.childrensdiabetesfoundation.org/donate/. Please make a note that says “IN MEMORY OF MADELINE MANNINO” or mail a check to Dept #880505, PO Box 29650, Phoenix, AZ 85038-9650.

Please meet for the Mass of Christian Burial Wednesday, May 25, 2022, at Gesu Catholic Church at 10:30 AM. Private burial in All Souls Cemetery.

Mass will be livestreamed at https://boxcast.tv/view/memorial-service-for-madeline-mannino-qtmvlhbal0hifkxzrma8

Offer Condolence for the family of Madeline Mannino

We are pleased to provide for you this grief video series by Doug Manning titled The Journey of Grief. His presentation about the END_OF_DOCUMENT_TOKEN_TO_BE_REPLACED