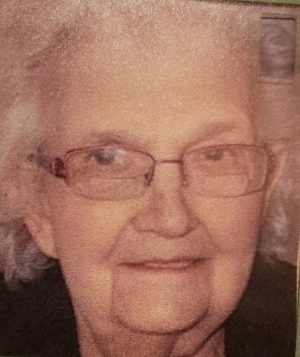 Marianne was born on May 31, 1932, and passed away on January 31, 2020. She most recently was a resident of Newbury, but she grew up in Chardon and graduated from Notre Dame Academy in 1950. Marianne was an active parishioner of St. Mary Church in Chardon, where she was school secretary from 1970-1980, and served on the Bereavement Committee. She was a member and resident artist for the Christ Child Society Chapter of Geauga County.

Marianne was very creative and artistic. She was talented in calligraphy and painting, and was a scenery designer for the Geauga Lyric Theater Guild. Marianne was a quiet, sweet soul who was a beloved wife, mother, grandmother, and great-grandmother. She had a deep faith and was devoted to Our Blessed Mother Mary. Marianne was very generous and giving and she will be missed by all.

Relatives and friends are requested to meet for the Mass of Christian Burial Friday, February 7, 2020 at 10 AM at St. Mary Catholic Church, 401 North Street Chardon, OH. Burial following at All Souls Cemetery. Family will receive friends to pay tribute to and celebrate the life of Marianne at THE DeJOHN FUNERAL HOME & CELEBRATIONS CENTER OF CHESTERLAND 12811 CHILLICOTHE ROAD (Rt. 306, just south of Mayfield Rd.) THURSDAY 3-8 PM.

Offer Condolence for the family of Marianne Walsh

We are pleased to provide for you this grief video series by Doug Manning titled The Journey of Grief. His presentation about the END_OF_DOCUMENT_TOKEN_TO_BE_REPLACED