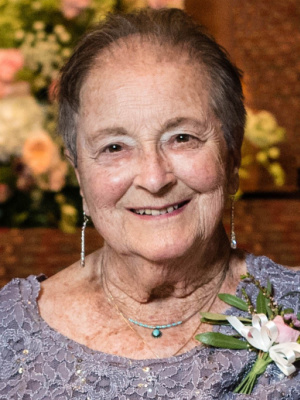 Marjorie (Mom; Marge; Grandma; GG) was born on Christmas Eve 1924 to her parents Margaret and Walter Palenschat, and truly was a gift to all who knew her! Her boundless love and devotion to   family and friends, unshakeable faith and tenacity, and joy for life, have left a deep and permanent impression on us all.

An only child, Marge would bring into the world seven children of her own with beloved husband John (Jack) Waldeck: Jack Jr., Michael, Peggy, Kathy, Nancy, Dan, and David.  Marge and Jack were both native Clevelanders and married here in 1948 (the last year the Cleveland Indians won a World Series, so a lucky year!). Their marriage was a model one, showing our family a sustaining love and respect, strong faith, teamwork (truly needed with seven children), and fun!

None of us seven will ever forget the rousing family celebrations, happy hours (the kids were allowed to drink Ginger Ale) and pranks while growing up, along with frequent (weekly?) parties in which Mom and Dad joined their wide circle of friends, including the Schades, Corrigans, Kampman’s, and Cullens.   Jack (Dad; Grandpa) passed away too young on December 24th 1980 on Mom’s birthday…roughly 40 years ago.  He always stayed close to Mom’s heart, along with all of ours.

Mom attended Gesu School in University Heights during the 1930’s, after her family had moved to Edgerton Road.  She would continue to enjoy Gesu class reunions well into 1990’s. Mom graduated from Notre Dame Academy, which at the time was located on Ansel Road in Cleveland. She would take the streetcar from the Heights to get there.  Mom continued her education at Notre Dame College in South Euclid, obtaining her degree in an era where this was very uncommon.

Mom learned to play tennis while in school and kept on playing into the 1980s, when her hips would no longer allow her to do so. She said recently that her backhand was her forte, which most agree is the harder stroke to perfect.  She remained a lifelong, avid tennis fan, especially of Roger Federer. The arrival of the cable Tennis Channel into the Waldeck household on Boynton Rd. was a merry one!

Another passion of Mom’s was bridge.  She played with friends on a weekly basis for decades and hosted on countless occasions.  These bridge games would go on for hours, often with up to 20 close friends of Moms.  In the earlier years, it would take a couple days for cigarette smoke to clear from the house.  Of course, many roaring laughs were heard throughout these marathons.

Generations of Waldeck’s know that Mom was quite the competitor whether you played Scrabble, Monopoly, Uno, or Go Fish with her.  Usually the word “cheating” would enter the conversation when you played a game with Mom!

Mom was always up for new adventure and loved to travel while she still could, especially if it took her to see family.  This included travels to Athens Greece to see daughter Nancy and family, Napa and San Francisco California to visit son Michael, and Long Beach, California and Tampa, Florida to see daughter Kathy and family.  She rode a mule into the Grand Canyon well into her sixties vacationing with son Jack and daughter-in-law Cheri and family.  There was also a memory and laughter filled large family reunion in Outer Banks South Carolina during 2004… her 80th birthday year.

Mom loved sunshine and beaches…and could not get enough of either.  It was rare that she truly felt too hot or you would see her sweating, while others around her were drenched in it.

Despite all these far-flung travels, a cherished place for Mom to stay was on the shores of Lake Erie in Vermilion, Ohio…less than an hour from Cleveland Heights. This had been an annual pilgrimage starting in the early 1970s, when Mom and Dad rented the tiny Leopold cottage at Linwood Park.

The Linwood excursions provided Mom a captive opportunity to spend day and night each year with the greatest number of her children, their spouses, grandchildren, great grandchildren, and friends both new and old.   Time was passed simply here: beach, lunch, beach, happy hour, dinner, and crazy games that would last well into the morning, occasionally resulting in “Mr. Linwood” commanding us to shut the party down.   Mom did not want to miss a minute of it, with anyone.

Grandma had a special and unique relationship with each of her grandchildren, including those who could not make it to Vermilion. She deeply loved Bruce Jr., Doug, Jack, Matt, Becca, Steve, Andrew, Jon, Christina, Megan, Jeremy, Colin, and Spencer…. and of course great grandchildren Jake, Jimmy, Emma, Hanna, and Adrian.

Mom was a person with a big heart, and empathetic to others.  In her later years, when resources became scarce due to health issues, she never wavered from giving to countless charities as she had always done, along with prioritizing Church giving and Catholic Charities.  Mom went door to door in our neighborhood raising money for the American Heart Association for years, and was a volunteer patient-visitor at University Hospitals.  She always felt comfort in community and helping others, and it didn’t hurt that she was a highly sociable person!

Mom/Grandma/GG, is a special kind of hero, one that people outside of family and friends will not usually be aware of.  Mom never stopped having to be a mother.  She embraced, endured, and never retired from her sole parenting role in the 40 years after Dad passed away…until God called her.  A hero like Mom created, “little daily miracles, illuminations, matches struck unexpectedly in the dark” that we will never forget.

In lieu of flowers, contributions in memory of Marge suggested to The Music Settlement www.themusicsettlement.org; or to ARC of Greater Cleveland www.arcofgreatercleveland.org. Please meet for the Mass of Christian Burial Saturday, March 13, 2021 at St. Ann Catholic Church of Communion of Saints Parish at 11 AM. Interment following in Calvary Cemetery. Mass will be live-streamed here. Arrangements entrusted to THE DeJOHN-FLYNN-MYLOTT FUNERAL HOME OF SOUTH EUCLID.

Offer Condolence for the family of Marjorie R. Waldeck

We are pleased to provide for you this grief video series by Doug Manning titled The Journey of Grief. His presentation about the END_OF_DOCUMENT_TOKEN_TO_BE_REPLACED