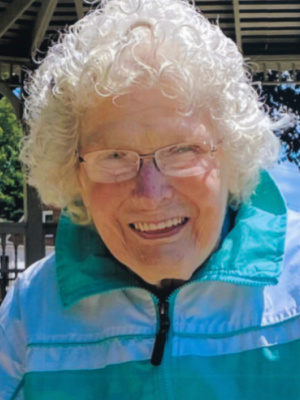 Marna Arlene Thomas, RN (nee O’Connor) was born in Syracuse NY in 1930 the oldest of three children and the daughter of Arlene O’Connor (nee Travers) and George O’Connor.  She is preceded in death by her parents, her husband Dick, her brother George (“Bob”) O’Connor, sister Kay Fosegan, a daughter Maribeth and a son Rick.

Marna graduated from St. Anthony Padua High School in 1948 and St. Joseph College of Nursing in 1951 and remained an active alumna.  She worked as an RN at St. Joseph’s Hospital in Syracuse.  Marna married Richard B. “Dick” Thomas in 1951 and had seven children:  Richard (“Rick”) (deceased) (Karen), Kristen Metsch (Scott), Leslie Sullivan (Tom), Maribeth (deceased,) Cherie Pencak (David), David (Janis) and Kevin (Meg.)  Dick and Marna moved to Lyndhurst, OH in 1963 and were long time members of St. Clare Catholic Church.  Marna worked for 20 years as a nursing supervisor of Menorah Park Senior Living Center in Beachwood Ohio where she was recognized for exceptional service in 1987.

Marna enjoyed gardening, reading, watercolor painting, corresponding with family and friends, “Everybody Loves Raymond,” and Graham Crackers.  She was fond of music especially The Young Tenors, music from the 1950-60’s and patriotic WW2 Era music (a longtime listener of WKHR 91.5 FM – of course, they knew her by name.)

She had many animated and sometimes contentious discussions with her ‘Alexa’ regarding Tom Jones, Anne Murray, Willie Nelson and of course Neil Diamond (who sang directly to her at his most recent Cleveland concert where she sat in the far far back row of the packed arena.)

Marna loved movies especially “The Guns of Navarone,” “Tombstone,” and “Casablanca.”  She would make sure you knew which of her favorite classics was coming up on The Movie Channel.  There was nothing better in the whole world than a can of Pepsi, some hummus with crackers and Humphrey Bogart.

Marna loved to camp especially with Dick in Ashtabula and loved being at Payne’s cottage in Pennsylvania with their dear friends Marg and Fred.  She also enjoyed visiting with the extended family each year in Syracuse and in Jordon NY on the eastern shore of Otter Lake.  Caring for the elderly was her special passion even after retirement; sometimes inviting the loneliest residents from Menorah Park to our family Christmas, Easter, and Thanksgiving dinners where there were cinnamon rolls, pineapple upside-down cake with whipped cream on top, and the infamous green-bean casserole.  Summer times also brought strawberry shortcake and homemade biscuits as the main course for Sunday dinner.

No new baby’s head was safe from the “Nana Treatment” getting their hair gooped with Johnson and Johnson’s baby lotion until it formed a prominent spike down the center of the forehead. She loved 4th of July picnics, fireworks, parades, marching bands and especially pizza and fudge on “Wizard of Oz” night.

Dick and Marna were especially close to Marna’s sister Kay and Kay’s husband Joe Fosegan (both have recently passed.)  She doted on Kay and Joe’s kids as if they were her own:  Scott and his wife Mel, Jeff and his wife Penny, Ryan, Jennifer and her husband Josh, and Adrienne and her husband Joel.  Annual Thanksgiving weekends at Aunt Kay’s house in Alfred NY were cannot-miss events and were among the most cherished of Marna’s family gatherings and the happiest of memories among all their children.

Marna had celebrity status at The Waterford Assisted Living facility in Richmond heights, and could often be found in the garden there, bringing in bootleg flowers while sneaking in unauthorized to spruce things up.  The staff and residents all looked forward to seeing her beaming face when they would run into her in the hallways or join her in the dining room for lunch.

Marna was above all a people-focused person.  With her address and phone book at the ready, she consistently and with great care and concern checked in on elderly friends over the phone and never forgot to send a card.  Not surprisingly, cards and letters routinely showed up at the house from those whose lives she touched.  There was always a sense of warm welcome which she exuded through her compassion for others.  Sweet, generous with her time and fun, you couldn’t help but notice her thoughtfulness and caring which she lavished on all she met.

Dick and Marna helped to raise two of their grandchildren Kevin and Jessica (who would diligently help get dinner ready every night – making sure Bapa had his salad ready when he came home from work.) Those closest to her were subject to “adoption” as well such as her niece Gwen and her grand-niece Ricki (who reigned as the undisputed “baby” of the family for 17 years.)  Her sons-in law (especially Tom Sullivan) were true sons to her.  There were many special people like these.  She treated everyone like family – as every kid in the neighborhood knew if they were caught in the house at bath time.  The kids in the neighborhood all called her “Graham Cracker Nunu.”

A child of the Depression (Marna, Kay and Bob were all moved to orphanages when poverty struck the family in the 1930’s) there weren’t too many things she was willing to throw away, including Kleenex tissues which she notoriously stuffed up her sleeve for re-use or carry in her hand, wringing the tissues into knots throughout the day.

While she made sure that her children growing up finished their vegetables, her grandchildren in turn thrived on peanut-butter and brown sugar sandwiches because as she would say “there’s no such thing as too much sugar.”  Sleepovers at Nana’s usually ended with Irish lullabies at night.  Even Bing Crosby couldn’t touch Marna’s version of Too-ra-loo-ra-loo-ral or, as her grandson Kevin would say “Wait’ll you hear this woman sing!”

Marna always made sure that Santa covered the floor with presents from door to door.  Backyards on Gordon road were for kite flying, picnics and Easter Egg hunts; First Communions, graduations, and prom pictures; tomatoes, flowers, and squirrel feeders along the deck that Dick and her sons built for her.  And how she and Dick loved the birds, keeping bird watching books and binoculars handy at all times.  And when you have a grandmother like Marna Thomas, of course you bring her to “Grandparents Day” each year at school, but I bet you didn’t know you also bring her to “Show and Tell” to celebrate the letter “N” as her granddaughter Erin did.  (“N” is for Nana.)  As for the other grandchildren she loved listening to Tommy play his piano, JR in his yellow alligator shoes, Mike and his bright red sport jacket (and beautiful blue eyes), Patrick with his dinosaurs, Kevin with his Bluplo Lego building blocks (ownership of which is still in dispute,) Kelly the first victim of the Marna RN overly tight diaper change, and of course Jessica with her army of friends who all became “grandchildren” themselves.  And when her son David married late and brought with him his own stepchildren and grandchildren, she loved them as well, making sure to get pictures of them to hang on her bedroom wall.

Marna was stubborn.  No more so than with her steadfast cheerfulness.  No matter the inconvenience, sadness, illness or even tragedy, all who encountered her were met only with that ever-present cheerful smile along with a greeting of sincere interest and concern.  She drew strength from her faith, nightly reading from her stash of prayer books and devotional booklets, holding steady to her friendship with the Blessed Mother.  The shelves in her living room (set up by her son Kevin) were filled with statues of angels of varying sizes, mostly gifts from others.  Her house was filled with angels.  Now she is among them.  She will be missed.  May she rest in peace.

Contributions in memory of Marna suggested to The Salvation Army.

The family will receive friends to pay tribute and celebrate the life of Marna at THE DeJOHN-FLYNN-MYLOTT FUNERAL HOME OF WILLOUGHBY HILLS, 28890 CHARDON RD. (between Bishop Rd. and Rt. 91) SATURDAY, September 25, 2021 at 11 AM UNTIL 3 PM. Prayers at 2:45 PM.  NOTE: Family suggests masks and social distancing.

Offer Condolence for the family of Marna Arlene Thomas R.N.

We are pleased to provide for you this grief video series by Doug Manning titled The Journey of Grief. His presentation about the END_OF_DOCUMENT_TOKEN_TO_BE_REPLACED