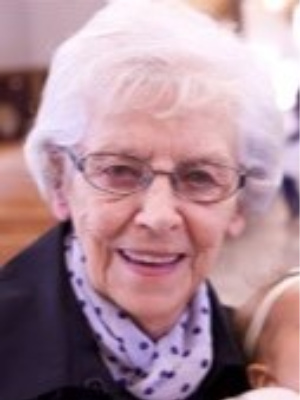 Martina was born on July 15, 1934 in Brusnice, Slovenia and passed away on April 19, 2020. She was a resident of Richmond Heights since 1966. Martina fled her homeland in 1945 and initially spent 1 year in various refugee camps in Austria, then she spent the next 3 years in a refugee camp in Spittal, Austria until 1949 when she then immigrated to the United States. She settled in Gary, Indiana later moving to Cleveland in 1953. She graduated from Lew Wallace High School in Gary, IN and attended Dyke University. Martina worked for over 30+ years as an Office Manager at Kollander World Travel. She was a member of St. Mary Altar Society, KSKJ, Slovenska Pristava Pensioners Club and also serving as their Secretary for 13 years, Koroton Pevski Zbor (former member), Pristava and Slovenia Women’s Union. Martina enjoyed volunteering at St. Felicitas’ office for over 5 years. She loved sewing, gardening, surfing the internet and was an avid reader. She was proud of her Slovenian Heritage and was devoted to her family and faith. Martina will be dearly missed by her family and friends.

In lieu of flowers, contributions may be made in memory of Martina to St. Mary of the Assumption Catholic Church 15519 Holmes Ave., Cleveland, OH 44110.

Offer Condolence for the family of Martina Stepec

We are pleased to provide for you this grief video series by Doug Manning titled The Journey of Grief. His presentation about the END_OF_DOCUMENT_TOKEN_TO_BE_REPLACED