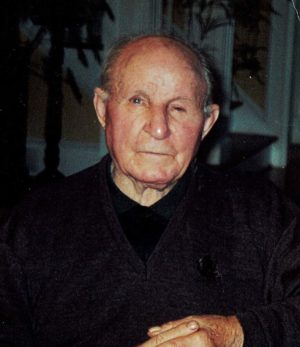 Mike was born on October 29, 1923 in Cleveland and died on October 25, 2019 in Middlefield, Ohio, four days before his 96th birthday. He was a lifelong Cleveland resident. Mike proudly served in the Army from 1951 to 1954 during the Korean War. He was awarded several military honors; ROK Presidential Unit Citation (1953), Korean Service Medal with 4 Bronze Stars, United Nations Service Medal and National Defense Service Medal. Mike and his wife were the proud owners of The Zelena Dolina property in Ashtabula where they enjoyed hosting parties, dancing and camping by the Grand River for many years. Mike loved his church and was a dedicated member of Saint Vitus. He enjoyed music, especially polkas! Mike was a father-figure to many and was very loved by his family. He will be greatly missed.

Contributions may be made in Mike’s name to Saint Vitus Catholic Church. Mass of Christian Burial Saturday, November 2, 2019 at Saint Vitus Catholic Church at 10 AM. (6019 Lausche Ave, Cleveland, OH 44103). Burial following at All Souls Cemetery. Family will receive friends to pay tribute to and celebrate Mike’s life at THE ZEVNIK-COSIC FUNERAL HOME OF WILLOUGHBY HILLS, 28890 CHARDON ROAD (between Bishop Rd. and Rt. 91) FRIDAY 4-7 PM.

Offer Condolence for the family of Mathias Kavas

We are pleased to provide for you this grief video series by Doug Manning titled The Journey of Grief. His presentation about the END_OF_DOCUMENT_TOKEN_TO_BE_REPLACED