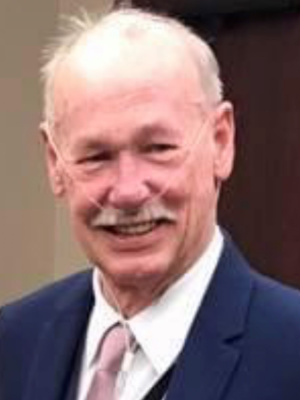 Mike, a man of many words, began causing havoc on January 10, 1950 in Cleveland, Ohio and fell silent on December 30, 2020. Mike was born and raised within the Polish community of Cleveland Ohio.  As a child he attended St. Casmir’s, where he gave the nuns a run for their money. Although taking Fridays off, Mike graduated from North High School in 1969 where he enjoyed taking shop courses such as welding. He followed in his father’s footsteps devoting 38 years to the Plain Dealer Newspaper as a teamster working the ‘good ol’ night shift before retiring in 2007.

Mike moved to Mentor Ohio in 1977 and never wanted to leave.  “Everything is better in Mentor” he would say and loved shopping at the local Heinen’s and Drug Mart. A Mentor man through and through, he enjoyed spending his summers down at The Mentor Lagoons dock or out on his boat perch or walleye fishing. He was an avid sports fan and enjoyed watching and supporting the local Mentor teams, the Cleveland Browns, the Cleveland Indians, and of course The Ohio State Buckeyes. Still supporting the Plain Dealer, he enjoyed reading the newspaper and working the crosswords. He loved feeding and watching the birds, especially the cardinals, while playing computer games like Candy Crush and Words with Friends.  Sunday mornings were dedicated to “Coffee Clutch” with Mervar to discuss current events and the weekly neighborhood gossip.

When Mike did venture out of Mentor, he enjoyed visiting family and friends for holiday gatherings, clambakes, and the occasional breakfast with friends from the old neighborhood.  In his prime he liked his family Canada fishing trips, attending golf outings such as The Polish Open and Cross Creek with the Plain Dealer guys, and going deer hunting in southern Ohio.

There was never a dull moment with Mike. He was the life of the party and had a contagious laugh and smile.  He was best known for his quick wit, wise cracks, and most practical wisdom.  Just imagine him tapping his foot and singing out of key to his favorite song “Ain’t Got No Home” by Clarence “Frogman” Henry.   Mike will also be remembered as a stubborn guy who did things his way on his terms, up to the very end.  He had the ability to speak his mind no matter what the topic.  Even in the hardest times of struggle, he told everyone he was fine and not to worry about him. Mike was a great dad, brother, uncle, and friend and will be dearly missed.

Today would have been Mike’s 71st birthday.  He is most likely celebrating with friends and family he has not seen in a while playing cards and making jokes while enjoying his Black Velvet with a splash of ginger ale.  His wish would be to win at pinochle, as well as have us remember the good times and sharing tears of laughter and not sorrow.  He would tell you to pour yourself a toddy, sit down and relax.

So, let us raise a glass and toast to this one-of-a-kind character: Until we meet again…Here’s to you Mike…Cheers.

Contributions may be made in memory of Mike to The American Lung Association.

Cremation by DeJohn Crematory. Arrangements by THE DeJOHN-FLYNN-MYLOTT FUNERAL HOME OF WILLOUGHBY HILLS.

Offer Condolence for the family of Michael Kozlowski

We are pleased to provide for you this grief video series by Doug Manning titled The Journey of Grief. His presentation about the END_OF_DOCUMENT_TOKEN_TO_BE_REPLACED