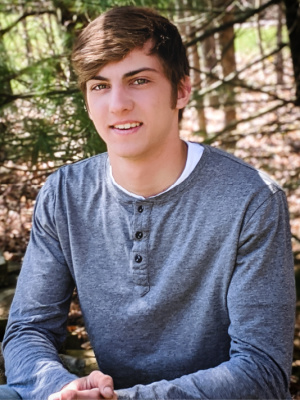 Montgomery was born on April 1, 2002 and grew up in Newbury, Ohio. He was voted by his peers to be Newbury High School’s last Homecoming King. He played football, baseball, and soccer for Newbury, and loved racing dirt bikes. No matter the sport, Monte always wore #26, just like his dad. His dad wore that number when he raced motocross, so Monte and Grayson always wore it proudly to honor him. Monte also loved being outdoors, whether he was hunting, fishing, or, his favorite, going to Camp Whitewood, where he spent his last 3 years there as a counselor. After growing up as the youngest sibling, he was happy to finally be the oldest kid bossing everyone around. But instead of bossing him around as a little kid, McKenna preferred to dress him up, which he was happy to do for his big sister. As an April Fools baby, Monte enjoyed life and keeping things light. If you ask any one of his friends, they’d tell you he was the class clown, always making everyone laugh. But, when he was around the grown-ups, he was known as the quiet kid with the goofy grin and a witty comment to add now and again.  There was never a dull moment when Monte was around. On September 25th, 2021, the world became a little less bright when Monte passed away. Monte’s jokes and little smirk will be greatly missed by all who knew him.

Offer Condolence for the family of Montgomery Zigurds Myer “Monte”

We are pleased to provide for you this grief video series by Doug Manning titled The Journey of Grief. His presentation about the END_OF_DOCUMENT_TOKEN_TO_BE_REPLACED