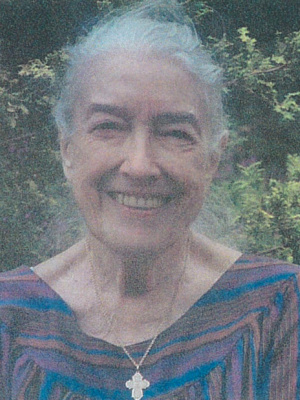 Muriel was born May 6, 1928 in Scranton, PA and died peacefully on September 20, 2021 in Middlefield, OH. She was a resident of Chardon since 1971 and previously resided in Cleveland Heights, South Euclid, and California.  She was a member of St. Mary Catholic Church in Chardon.

Muriel was a 1942 graduate of Christ the King School in East Cleveland and a 1946 graduate of Ursuline Academy Sacred Heart. She attended the University of California-Santa Barbara and earned an Associates degree from Los Angeles Valley Jr. College. She also attended night school at Fenn State and Kent State Extensions. She worked as the secretary to the sales manager for WGAR 1220 AM Radio for fifteen years.

Muriel was a breeder of champion Papillion dogs and was a member of the Grand River Kennel Club. Muriel had no children or siblings, but she had many friends. Some of her friendships were life-long including the late Patricia Derrig Bellis and Janet Hough Gorsline.

Muriel will be remembered for her love of dancing, sports, especially ice skating, downhill skiing and sailing which she enjoyed with her husband Phil. She also loved Papillion dogs, cats, and all of God’s critters. Muriel enjoyed crafting and volunteering. She volunteered for five years at Heather Hill in the special care center. She was known for her sense of humor and smiling face.

Mass of Christian Burial Tuesday, September 28, 2021 at St. Mary Catholic Church, 401 North Street, Chardon, at 11:30 AM. Burial following at All Souls Cemetery. Family will receive friends at THE CHURCH 10:30-11:30 AM. Arrangements by DeJohn Funeral Home & Crematory of Chardon (formerly Ritondaro).

Offer Condolence for the family of Muriel M. Golden

We are pleased to provide for you this grief video series by Doug Manning titled The Journey of Grief. His presentation about the END_OF_DOCUMENT_TOKEN_TO_BE_REPLACED