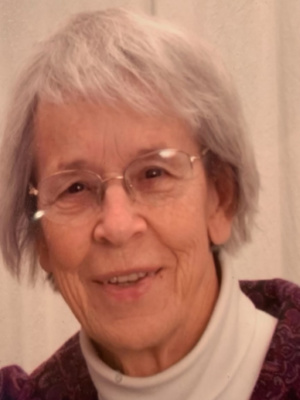 Nancy Armstrong (née Deaver) passed away on December 17, after a short illness. She was married for 58 years to Robert H. (Bob) Armstrong, who preceded her in death. She is survived by her daughters, Elizabeth Armstrong of Cleveland Hts., OH and Robin (Bob) Siktberg of Chardon, OH, and her two grandchildren Eric and Lauren Siktberg, and several nieces and nephews. She is predeceased by her parents, Lister A. Deaver and Bernice W. Deaver, and her brother John Deaver.

Nancy was born in Bloomington, IL, but her early years were spent in Bromley, Kent, England. She retained a lifelong love for all things British. She left England at age 10 just before The Blitz, often told stories of barrage balloons and taking tests in bomb shelters. She went back to England in 1992 with Robin to see her childhood home and pointed out some “newer” homes that replaced those that had been destroyed by German bombs. One of those homes was across the street, where a school friend and her family were killed.

Her teen years were in Hudson, OH, and Nancy attended Laurel School, eventually graduating from Kent State University. After college, she lived in Rome, Italy, for a year, where she worked at the American Embassy.

Nancy met her husband Robert in Akron, OH, and they married on January 12, 1957, eventually settling in Chesterland. They enjoyed skiing and tennis until their daughters came along and there was no longer time for their own activities. Nancy was active in the local Geauga County Republican Party and actually met Presidents Nixon, Ford and Reagan.

Nancy was a homemaker, but not your typical one. She mowed the lawn and plowed the driveway, refusing to let her husband do it, because she liked it. She made maple syrup from our trees, made her own jam, mayonnaise, bread, cakes and less successfully, her daughter’s clothes. Nancy took up quilting later in life, and with her artistic eye for color, made some beautiful quilts. And every year at Christmas, the family had English plum pudding, which her daughters thought was nasty, but it included hidden silver charms. If you got the horseshoe, it was good luck, the wedding ring, you were getting married, and so on. Of course the risk of someone choking on a charm always made dessert more exciting!

Nancy loved to garden and did it until she couldn’t anymore. She and Bob shared that passion and passed it on to Robin. Nancy learned to hitch up a horse trailer and get both daughters to their horse shows, and she fully supported them in their love of riding.

She loved classical music and was a talented piano player. After retirement, Nancy and Bob moved to Columbus, OH. They ushered for many years at the Ohio Theater for plays and concerts, and they were regular volunteers at the Franklin Park Conservatory. They also shared an interest in genealogy. Libby and Robin enjoyed taking her to concerts at Blossom, Severance, and the Hollywood Bowl in later years. Nancy loved to travel but was never a good navigator; she was more interested in looking out the window than at the map. Family lore is full of stories about driving multiple circles around English roundabouts or getting lost on crowded city streets due to her navigational skills. But Nancy loved traveling and doing things, and was always, always, up for the next adventure. On her last night, Robin said “I bet you would get on a plane and go to England if we would let you.” And predictably, she said yes.

Nancy showed her daughters how to be independent and not care about societal norms. She showed her girls that it was ok if they wanted to do non-girl things. In fact, she encouraged them to do so.

We will miss her forever. A memorial service is planned for a later date.

Offer Condolence for the family of Nancy Armstrong

We are pleased to provide for you this grief video series by Doug Manning titled The Journey of Grief. His presentation about the END_OF_DOCUMENT_TOKEN_TO_BE_REPLACED