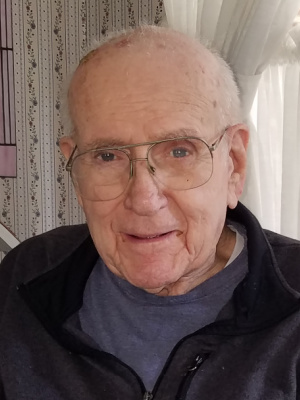 Paul Ray Klinko was born and lived in Cleveland for over thirty years before he moved to Euclid. He has lived in Euclid for the last sixty-one years. When his family moved to Euclid he joined and became an active member of St. Felicitas Catholic Church (currently St. John of the Cross Parish).

He attended and graduated from East Tech High School in 1944. He went on to serve in the Navy during the WW II. He spent his entire career as a maintenance engineer for Sears Roebuck. Paul was a Cleveland Indians fan and enjoyed spending his free time woodworking. He loved big band and country music. Paul was a friendly man with a heart of gold. He was giving, caring and always willing to help others. He was a devoted husband and father. He is remembered as witty and funny. He made everyone laugh with his yearly tradition of dressing up like “Baby New Year” (diaper and all). Paul will be greatly missed by his family and friends.

In lieu of flowers contributions may be made in Ray’s memory to Hospice of the Western Reserve PO Box 72101, Cleveland OH, 44192. Private Family Mass of Christian Burial at St. John of the Cross Catholic Church. Burial following with Military Honors at Ohio Western Reserve National Cemetery, Rittman OH. Arrangements by THE DeJOHN-FLYNN-MYLOTT FUNERAL HOME OF WILLOUGHBY HILLS. Online obituary and guestbook at www.DeJohnCares.com

Offer Condolence for the family of Paul “Ray” Klinko

We are pleased to provide for you this grief video series by Doug Manning titled The Journey of Grief. His presentation about the END_OF_DOCUMENT_TOKEN_TO_BE_REPLACED