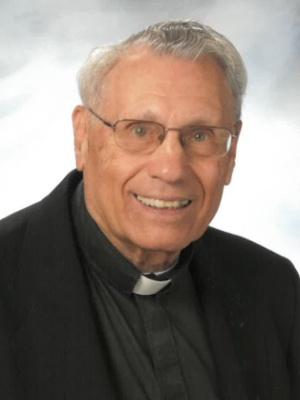 REV.  WILLIAM   P.  O’NEILL, Senior Priest-Retired, died Tuesday July 12, 2022, after having received the prayerful support and consolation of the Sacraments. William P. O’Neill was born on Feb. 15, 1935. His parents were the late Harold and Gertrude (nee Flecknoe), and he was the brother of Margaret “Peggy,” James (wife Sherry), Thomas (wife Judy) and the late Joan May and Dennis. He was also an uncle and great-uncle of many.

Fr. O’Neill will be especially remembered for his love of the Blessed Mother and his prayerful life.

Funeral Mass will be celebrated on Monday, July 18, 2022 at 11:00 a.m. in St. Clare Church. Bishop-Elect Michael Woost will be the main celebrant and Fr. Allan Laubenthal will be the homilist.

Offer Condolence for the family of Rev. William P. O’Neill

We are pleased to provide for you this grief video series by Doug Manning titled The Journey of Grief. His presentation about the END_OF_DOCUMENT_TOKEN_TO_BE_REPLACED