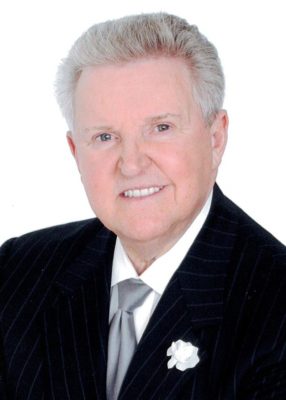 Dick was born on June 29, 1935 in Helen, WV and died on Friday, October 4, 2019.   For most of his life, he was fortunate to be a Cleveland resident.  Several decades ago, exercising his entrepreneurial talents, he opened his ballroom dance studio.  Eventually his business expanded until it merged quite naturally with the teaching of manners and etiquette.  He was a professional ballroom dancer, an award-winning instructor and a choreographer.  His students have included many celebrities, athletes, and politicians.  He has been featured in more than 100 television shows and hundreds of radio programs and print publications.  He was an etiquette consultant, professional development speaker and customer service etiquette trainer. Dick’s greatest joy was dancing and performing with his wife, Lorraine, who was also his business partner.  Many people have expressed their gratitude for the changes in their lives that he helped bring about by virtue of the skills he readily shared with them.  Dick will long be remembered as a dance master and witty gentleman who valued the importance of the social graces.

In lieu of flowers contributions may be made in memory of Dick to Hospice of the Western Reserve P.O. Box 72101, Cleveland, OH 44192.

Cremation by DeJohn Crematory. Celebration of Life Service Friday, October 11, 2019 at 7 PM at THE FUNERAL HOME. Family will receive friends to pay tribute to and celebrate the life of Dick at THE DeJOHN FUNERAL HOME & CELEBRATIONS CENTER OF CHESTERLAND 12811 CHILLICOTHE ROAD (Rt. 306, just south of Mayfield Rd.)  FRIDAY 4-7 PM.

Offer Condolence for the family of Richard D. “Dick” Blake

We are pleased to provide for you this grief video series by Doug Manning titled The Journey of Grief. His presentation about the END_OF_DOCUMENT_TOKEN_TO_BE_REPLACED