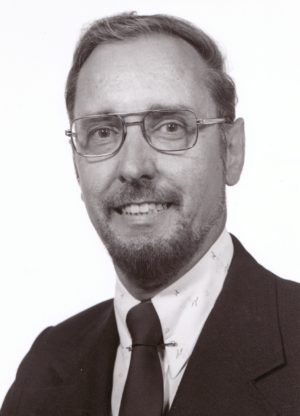 ROBERT H. MacNAUGHTON, Ph.D., aged 89 years, of Willoughby, formerly of South Euclid, went to be with the Lord on Oct.13, 2018 at Fairmount Healthcare Center, beloved husband for 58 wonderful years to Margaret E. “Peggy” (nee Hall), dear father of Mark (Jennifer) and Brian (Brenda), loving grandfather of Gabrielle, Paige and Megan, great-grandfather of Jacey, Julia and Joelle, devoted son of the late Robert H. and Helen (nee Buck). Following his service in the National Guard, Bob devoted his career to education, serving 30 years as faculty member and administrator at Cleveland State University, retiring as professor Emeritus of the College of Education. He was a long-time active member of the Church of the Covenant and was an avid gardener. Bob’s family would like to acknowledge the caring staff at Breckenridge Village and Hospice of the Western Reserve. In lieu of flowers, donations suggested to The Free Clinic, 12201 Euclid Ave., Cleveland, OH 44106, where Bob volunteered. Private burial was held in Lake View Cemetery.

Relatives and friends are invited to a Memorial Service Saturday, Nov. 17, 2018 at 2 PM at Lyons Chapel at the Nason Center at Breckenridge, 36859 Ridge Rd., Willoughby (44094). Friends received at a reception following the service. Arrangements entrusted to THE DeJOHN-FLYNN-MYLOTT FUNERAL HOME OF SOUTH EUCLID.

Born on April 8, 1929 in Cleveland Heights, Ohio, he was the son of Robert and Helen MacNaughton. He earned his undergraduate degree from DePauw University, his Master of Education from Harvard University, and received his Ph.D. from Indiana University. In 1960, he married the love of his life, Peggy Hall, his wife for 58 wonderful years. He was a professor Emeritus of the College of Education at Cleveland State University where he served thirty years as a faculty member and administrator. He received the Distinguished Member Award from the National Association of Teacher Educators in 1998. He was the author of numerous professional articles as well as two books: School Discipline Guidebook and Assisting and Assessing Educational Personnel. During his career as an educator, he served as a member (and as President) of the South Euclid – Lyndhurst School Board from 1976 to 1985.

After retiring, his volunteer activities included The Free Clinic of Cleveland and ushering at Playhouse Square. He was an active member of the Church of the Covenant, serving as an usher most Sundays for several years. He loved playing pool with friends and family, and was active in several groups at Breckenridge North, including gardening, photography displays, political study groups, and movie clubs. He traveled to many foreign countries with friends and family in which he continued his love of photography, taking scenic photos in all the places he ventured.

Robert will be dearly missed by his family, relatives and friends.

Offer Condolence for the family of Robert H. MacNaughton, Ph.D.

We are pleased to provide for you this grief video series by Doug Manning titled The Journey of Grief. His presentation about the END_OF_DOCUMENT_TOKEN_TO_BE_REPLACED