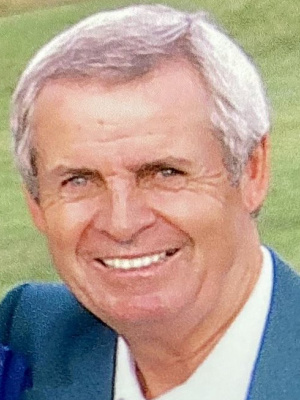 Bob was born on July 12, 1944 in Warren, Ohio. He learned the game of golf early in life from his mother, who had a 1-handicap and drove him around to tournaments. He won the Ohio Amateur on his 24th birthday (July 12) in 1968 after playing collegiately at Rollins College in Winter Park, FL, where he also earned an MBA.  He turned professional and played on the PGA Tour from 1971 to 1974. Lewis decided to leave the pro ranks — “I just wasn’t a good enough putter,” he said in a story published by Global Golf Post — and returned to the amateur game.  A highly successful player, Lewis compiled a 10-4 individual record as a member of victorious USA Walker Cup teams in 1981, 1983, 1985 and 1987, before serving as Walker Cup captain in 2003 and 2005. Lewis also represented the United States in two World Amateur Team Championships (1982, 1986), including a victory in 1982. He played in 31 USGA championships, highlighted by three runner-up finishes: in the 1980 U.S. Amateur and the 1981 and 1984 U.S. Mid-Amateurs. He also competed in three U.S. Opens and seven Masters Tournaments, earning low-amateur honors in 1987. Lewis’s outstanding amateur career included a win at the Ohio Open in 1978, along with numerous other national amateur events, including the Crump Cup and the Northeast Amateur.  He is also the current co-course record holder (64) at the world-renowned Pine Valley Golf Club in Clementon, NJ.  Bob was recently awarded the distinguished Bobby Jones award, the United States Golf Association’s highest honor.

While golf played a huge role in Bob’s life, his family was his highest and most cherished priority. Anyone who knew Bob, knew that he was a family man. He married Patricia, his wife of 48 years, in 1972 in Aix-Les-Bains, France. Bob and Patricia settled in Warren OH where Bob helped run the family business, Welded Tubes Inc., a steel tubing manufacturing company founded by his father in 1958. They raised their two children in Warren, but made sure to spend time in France with Patricia’s family.

Bob found great joy in youth mentoring and served as a volunteer golf coach at Gilmour Academy in Gates Mills, OH.  He was also involved in many charitable endeavors, serving on the board of the Northeastern Ohio chapter of Boys Hope Girls Hope and playing a leading role in establishing the “Values and Visions” education endowment in support of Catholic education.

After retirement, Bob and Patricia built a home in Montana, one of Bob’s lifelong dreams. Bob loved spending time in “Big Sky Country” fishing, playing golf and relaxing with family and friends. A strong Catholic whose faith never wavered; Bob led a life to be admired. He was loyal, generous, passionate and, above all else, forever faithful to his family and friends.

In lieu of flowers, contributions may be made in memory of Bob to Boys Hope Girls Hope 9619 Garfield Blvd, Cleveland, OH 44125. A Funeral Mass will be celebrated on Monday, March 29, 2021 at 10 AM at Church of the Gesu, 2470 Miramar Blvd., University Heights. Internment private, Russell Township Cemetery. Family will receive friends to pay tribute to and celebrate the life of Bob at THE DeJOHN FUNERAL HOME & CELEBRATIONS CENTER OF CHESTERLAND, 12811 CHILLICOTHE ROAD (Rt. 306, just south of Mayfield Rd.) SUNDAY 2-5 PM.

Offer Condolence for the family of Robert Lewis

We are pleased to provide for you this grief video series by Doug Manning titled The Journey of Grief. His presentation about the END_OF_DOCUMENT_TOKEN_TO_BE_REPLACED