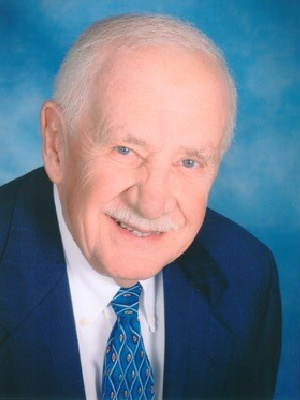 Ron was born December 16, 1931 in Cleveland, and passed away peacefully on January 16, 2021. He attended St. Benedict Grade School on Lamontier Ave. and East Blvd. and graduated from Benedictine High School in June, 1950.  Ron then graduated from St. Vincent College in Latrobe, PA in June, 1954, with a BS degree in Chemistry.  He was proud of his senior thesis titled; Synthesis of N- tertiary-Butyl-(alpha-methylbenzyl)-amine”.

On June 19, 1954 Dorothy (Emrick) and Ron were married. It was four years after they met at a dance where they were introduced by Dorothy’s good friend Sophie Novak. They danced the night away. Ron and Dot’s marriage lasted a bit shy of fifty years. Dorothy, in addition to being a loving wife, was Ron’s best friend. They were fortunate to have had the opportunity to travel extensively both domestically and internationally until he lost her to cancer on June 3rd, 2004. Never has a day gone by that he didn’t think of her. His life was blessed with three great children, six wonderful grandchildren, and one very special great-granddaughter. A loving legacy.

After Ron and Dot were married, he served in the U.S. Army National Guard (1954) and at the end of 1954 he was drafted into the Army and served two years in the U.S. Army Medical Corps stationed at Ft. Rucker, Alabama.

After being discharged from the Army, he entered industry in 1957 as a Research Chemist in the Chlorinated Products Division of Diamond Alkali Co. which in 1961 became Diamond Shamrock Corporation (DSC). His field of specialization was the synthesis of chlorinated organic compounds and biologically active organic compounds. After mergers, the company became ELTECH, from which he retired in September 1994.

Through his working career Ron enjoyed and was fortunate to able to follow a career path that was varied and rewarding — and it didn’t seem like work. His name appears on seven U.S. patents and a number of international equivalents, and, humbly, he would say that it doesn’t mean much since all have expired.

During retirement, golf became an addiction, playing weekly. The most enjoyable games of golf were those played on a Sunday afternoon with Dorothy at what was then the 9-hole par 3 course called Locust Grove.

Ron enjoyed being a lector at St. Pascal Baylon Church and thereafter at St. Clare Church, and enjoyed serving with Dorothy for years as an usher at the Playhouse Square theaters. Ron enjoyed listening to classical music during the course of the day and always had a book to read.  Tuesday mornings were always breakfast with the guys.  He also chauffeured his group of lady friends to dinner once a month.   He enjoyed cooking and was happy to have a standard plan, which his family always teased him about: steak on Sunday, salmon on Monday, pork chops on Tuesday, chicken on Wednesday, Pasta and meatballs on Thursday, clams linguine on Friday and hamburger and chips on Saturday.

You might ask: How did you get to live so long? It (in Ron’s opinion) was the result of a number of factors that included: good health, eating right, keeping busy (he was never without a project or two), having a happy disposition and sense of humor, hanging out with his family and friends, and continuing to learn new things throughout his entire life.

In lieu of flowers, contributions may be made in memory of Ron to Hospice of the Western Reserve, PO Box 72101, Cleveland, OH 44192 or hospicewr.org/tribute. Relatives and Friends are invited to meet for the Mass of Christian Burial Thursday, January 21, 2021 at 10 AM at St. Clare Catholic Church, 5659 Mayfield Road, Lyndhurst, OH 44124. Burial following with Military Honors at All Souls Cemetery. Arrangements by THE DeJOHN-FLYNN-MYLOTT FUNERAL HOME OF WILLOUGHBY HILLS.

Offer Condolence for the family of Roland Horvath

We are pleased to provide for you this grief video series by Doug Manning titled The Journey of Grief. His presentation about the END_OF_DOCUMENT_TOKEN_TO_BE_REPLACED