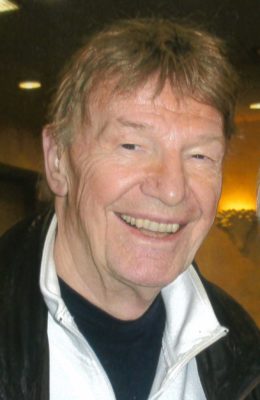 Ronald was born on August 7, 1933 in Cleveland, OH and passed away on March 17, 2019. Ron served his country in the Marine Corps and, thereafter, married Paula Lear. Together, Ron and Paula had two children and were residents of Mayfield Village since 1971, and former residents of Cleveland Heights. Ron was a member of the United Auto Workers Local 1005, Department of Veterans Affairs, and Fraternal Order of Police Associates of Ohio – Eastern Cuyahoga County Chapter. Ron graduated from Shaw High School and attended Western Reserve College. Ron worked at General Motors as a tool and die maker and machine repairman. Ron’s passions, other than his wife and family, were Ohio State football, classic Hollywood movies, music (especially Frank Sinatra), and reading. Ron also enjoyed traveling all over the US, especially Elko and Las Vegas, Nevada, as well as internationally in Spain, Ireland and Mexico. Ron was funny and witty and was always the life of the party. His friends knew him for his “Ronism’s”. He will be remembered as a wonderful and devoted husband, father, grandfather, and friend to many.

In lieu of flowers contributions may be made in memory of Ron to Parkinson Foundation 2800 Corporate Exchange Dr. Ste 360, Columbus, OH 43231. Cremation by DeJohn Crematory. ALL SERVICES PRIVATE.

Offer Condolence for the family of Ronald F. Lear

We are pleased to provide for you this grief video series by Doug Manning titled The Journey of Grief. His presentation about the END_OF_DOCUMENT_TOKEN_TO_BE_REPLACED