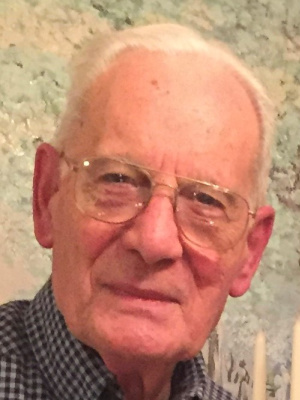 Mass of Christian Burial Tuesday, May 25, 2021 at St. Paschal Baylon Catholic Church at 10 AM. Entombment All Souls Mausoleum. Family will receive friends to celebrate the life of Salvatore at THE DeJOHN-FLYNN-MYLOTT FUNERAL HOME OF WILLOUGHBY HILLS, 28890 CHARDON RD. (between Bishop Rd. and Rt. 91) MONDAY 4-7 PM

Salvatore Belli was a product of Italy’s version of the Greatest Generation. He was born on Valentine’s Day 1926 in Baranello, a small agricultural town nested in the mountains of region of Compobasso in the province of Molise. His father was a small businessman who had also served as an officer in the Carabinieri, the nation’s national police force. His mother was a housewife. Salvatore had four sisters.

Life was already difficult in Italy in the years following the first World War. As a teenager, Salvatore worked many jobs, including an administrative position in local government, to help support the family during those lean years.The onset of World War II made matters worse, bringing so much destruction and turmoil in the country. While his father attended to his police duties, Salvatore, now a teenager, took upon the responsibility of protecting his mother and sisters from harm as the occupying forces withdrew from the Italian countryside.

Salvatore had aspired to a career as a lawyer. But in those times, a son’s occupation was typically directed by his father. Salvatore’s father had decided that the surest path to self-sufficiency was the teaching profession. Salvatore enrolled into the University of Naples and graduated with a degree in education.

It is not an overstatement to describe Salvatore in those days as a handsome, suave and exquisitely refined young man. A professional photograph of Salvatore in his early twenties reminds the viewer of the actor, Rudolph Valentino. Indeed, when Salvatore sent the photo on a lark to Cinecitta, Italy’s Hollywood, a movie producer invited him for an interview and screen test. Salvatore’s father vetoed the idea.

Salvatore’s career as a high school teacher in the Compobasso region was relatively brief. 1948 was the year that Salvatore’s life would embark on a different course. Salvatore’s childhood friend, Mario Discenza, was engaged to marry Elisa Tamasi, a girl from the nearby town of Carpinone. Salvatore attended the marriage reception. He looked forward to dancing with the eligible females. As he surveyed those in attendance, his eyes immediately fixated on the 17-year old sister of Elisa. He introduced himself and asked her to dance. By the end of the evening, he knew to a certainty that this shy and demure young woman, Flora Tamasi, would be his wife someday.

Ah but the path to matrimony would not be without its challenges. Flora’s father, a carpenter by trade, had decided to pursue employment opportunities in the United States. He uprooted the family and took his wife and Flora with him to Cleveland where the then-thriving city provided a favorable economic climate with plenty of work in construction.Salvatore could not put Flora out of his mind. Over the ensuing three years, he sent her a series of letters about his feelings for her. This channel of communication was somewhat one sided. Flora’s mother intercepted many of the letters before her daughter could see them because the mother doubted the viability of the long-distance relationship.

But Salvatore was persistent. In 1951, he secured a student visa to enter the United States in order to pursue his relationship with Flora. One fascinating historical detail of their marriage is the fact that they had twice entered into the vows of matrimony. Flora had already become a United States citizen, but Salvatore’s student visa was about to expire.Salvatore and Flora were first married in a civil ceremony at Cleveland City Hall in 1952. The marriage did not dissuade the immigration authorities from requiring Salvatore to leave. He departed the country at the boundary with Canada and returned one day later. Being both Catholics, they were married again in a religious ceremony at Mount Carmel Church in 1953 by Monsignor O’Donnell.

A baby boy, Dennis, arrived in 1954, followed by a baby girl, Leslie, in 1956. Language barriers required Salvatore had to look for employment outside of the field of education. He worked a number of arduous labor jobs before being hired by Cleveland Trust, a predecessor to today’s KeyBank.Salvatore and Flora grew homesick. They decided to return to Italy. The common mode of international travel in those days was by ship. They booked an eleven day voyage to Naples. Leslie was only six months old at the time.However, economic conditions in Italy remained depressed. The young couple realized that the future of the family would be best be secured in this country. They returned to Cleveland a year later.

Salvatore was rehired by Cleveland Trust. He left the bank shortly thereafter to enter a partnership to operate a grocery store specializing in Italian foods. When that venture did not work out as hoped, Salvatore and his brother-in-law Mario, who had also immigrated to the United States with his wife and family, purchased the Mayfield Importing Company, a well known specialty grocery store in the heart of Cleveland’s Little Italy neighborhood.

Salvatore and Flora bought a newly constructed home on Eastlawn Drive in Highland Heights in 1960. This house would serve as their residence for the ensuing sixty-one years. Flora gave birth to a second daughter, Lisa, in 1963. The grocery store could not support two partners. Salvatore ultimately decided to leave the business in the hands of his brother-in-law and return to the bank. Cleveland Trust rehired him as a teller.

Salvatore enjoyed a long and satisfying career with the bank. He was assigned to many of the neighborhood branches over the years as an assistant manager and manager. Employees and customers alike praised him for his expertise, honesty, patience, flexibility, undivided interest in their welfare. He ascended to the position of Vice-President by the time of his retirement in 1991. He received many awards for his exemplary performance. For the next thirty years of retirement, Salvatore enjoyed the company of his wife, his three children, and his two grandchildren, Anthony and Alyssa.

Salvatore maintained a keen interest in politics and world affairs. He so enjoyed debating these subjects with family and visitors. Hard as it may be to believe, Salvatore’s hobby was grocery shopping. He took great pleasure in going from store to store looking for items of the highest quality and the best prices. Although Salvatore never had the opportunity to pursue the legal career to which he aspired, he took great pride in the fact that his son Dennis and granddaughter Alyssa are licensed lawyers today in the State of Ohio.

Anyone who had spent time with this remarkable man was touched by his humanity, sincerity, and magnanimous personality. His capacity to love was endless and eternal. It is difficult to express the extent he would go to provide and care for his family. Throughout his life, he continuously displayed a sense of humor, like no other. Even in difficult times and when least expected, he was always able to make his family laugh.

He will be so surely missed. Those close to him take comfort in the firm belief that this wonderful husband, father, grandfather and friend will be rewarded for his life of rectitude and good deeds in the afterlife.

Offer Condolence for the family of Salvatore Belli

We are pleased to provide for you this grief video series by Doug Manning titled The Journey of Grief. His presentation about the END_OF_DOCUMENT_TOKEN_TO_BE_REPLACED