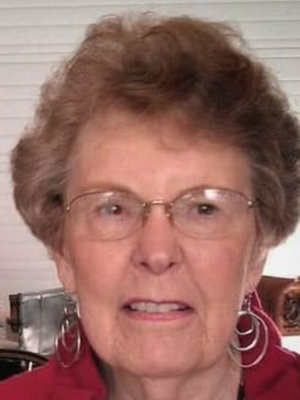 She grew up on a working farm in Oregon, paid her way through college by selling her 4H reserve grand champion heifer for $900. After earning her degree in Secretarial Science from Oregon State College, her sense of adventure and travel took her to New York City where she pursued her dream of becoming a stewardess for United Airlines, and later met Tom, her husband of 50 years.

As an Army wife, she moved to Japan and started a family. Building on her family in Philadelphia and Florida before settling in Cleveland in 1961, devoting her life to her husband and eight children.

She was a member of the Christ Child Society, active member of the Saint Gregory the Great School and Catholic Church, and the Cleveland Botanical Society.

Shirley enjoyed playing and coaching tennis, bowling, and was an avid fan of the Cleveland Indians, Cleveland Browns and Cleveland Cavaliers.

Shirley was described as adventurous and social. She loved to have a good time and being surrounded by people. She was known for having a saying and a song to fit any situation.

She will be dearly missed.

In lieu of flowers  contributions may be made in Shirley’s memory to the Ohio Parkinson Foundation Northeast Region PO Box 31907 Independence OH 44131.  Mass of Christian Burial Saturday, December 5, 2020 at 11 AM at St. Gregory the Great Catholic Church of Sacred Heart of Jesus Parish 1545 South Green Rd, South Euclid. Interment following at Lake View Cemetery. Family will receive friends to pay tribute to and celebrate the life of Shirley at THE CHURCH SATURDAY MORNING 10-11

Offer Condolence for the family of Shirley Cranley

We are pleased to provide for you this grief video series by Doug Manning titled The Journey of Grief. His presentation about the END_OF_DOCUMENT_TOKEN_TO_BE_REPLACED