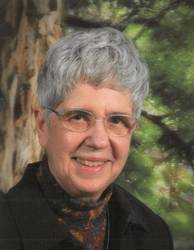 Sister Barbara Eppich danced her way through the last 40 years of her life. From the opening musical notes of a retreat in Boston introducing her to liturgical dance, she was hooked. And from that point on she embraced it as a rich and meaningful prayer form and continually sought ways to incorporate it into her classroom. The spirited woman of faith and innovative educator died March 30 at Regina Health Center where she had been in residence since her August 2019 transfer from Light of Hearts Villa. She was 85.

Nancy Rosemary Eppich was born September 4, 1934, in Cleveland, the oldest of five children born to Anton and Anna (Gron) Eppich. Residents of the Collinwood area, the Eppich family belonged to St. Jerome Parish where Nancy attended school before advancing to Villa Angela Academy. Months after her 1952 graduation, Nancy joined the Ursuline community. At her clothing ceremony she was given the name Mary Barbara, which she later shortened to Barbara. She professed final vows August 12, 1958.

Her ministry career was bookended by tenures at St. Jerome School, where she began her career as a teacher in 1954 and concluded it as director of a Montessori pre-school in 2015. In the intervening years Sister Barbara enjoyed teaching assignments at St. Charles Borromeo (Parma), St. Ann (Cleveland Heights), and at St. Patrick-St. Malachi, Urban Community, Immaculate Conception, and Our Lady of Peace schools, all in Cleveland. She also served as principal at Immaculate Conception.

In 1992, after serving two years in the classroom at Collinwood’s St. Joseph School, Sister Barbara realized her dream in establishing the Ursuline Family Care Program, a Montessori-based pre-school, in the St. Joseph building. She served as director for 17 years before the school and the program were closed in 2009. Convinced of its value, Sister Barbara searched for a new home for her program and in 2010 reopened it at St. Jerome School, coming full circle from her first teaching assignment there. She served as the program director until retiring in 2015.

In retirement Sister Barbara often reminisced about her participation in sacred dance. Dance, she said, is like a “wordless gentleness that flows out to all present …Its purpose is to praise God and give thanks.” Shortly before her death, Sister Barbara received a card from a niece, thanking her for “dancing [her] love, laughter and kindness around everyone in [her] life.”

Sister Barbara will be remembered as a creative and caring educator who cherished each student. She was a deeply spiritual woman, committed religious and a loving sister, aunt and friend.

She is survived by her brother Michael, sister Barbara Struna (husband Timothy), and nieces and nephews. She was preceded in death by her parents and two sisters, Anne Lang and Patricia Ruszkowski.

Donations in her memory can be made to the Ursuline Sisters.

Offer Condolence for the family of Sr. Barbara Eppich, OSU

We are pleased to provide for you this grief video series by Doug Manning titled The Journey of Grief. His presentation about the END_OF_DOCUMENT_TOKEN_TO_BE_REPLACED