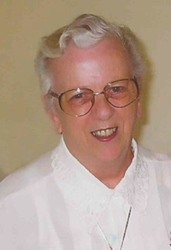 Sister Joann Kessler (formerly Sister M. Herman) possessed a unique array of talents and interests which she placed at the service of her various ministries. Whether sharing her faith preparing her second graders for First Communion, providing compassionate outreach services to those in need through Martin de Porres Center or utilizing her attention to detail in administrative positions at St. Joseph School (Collinwood), Beaumont School, Ursuline College and in the congregational Archives, Sister Joann matched her gifts to her service. The dedicated and faith-filled woman with dogged determination and spirit died March 29 at Regina Health Center in Richfield where she had been in residence since March 2013. She was 93years old.

Joann, as she came to be known by combining her first and middle names, grew up in Cleveland and attended St. Jerome School. Within months of her graduation from Villa Angela Academy, Joann joined the Ursuline congregation. At her reception ceremony she was given the name Mary Herman. She professed final vows in 1950. She earned her bachelor degree from St. John College and a master’s in Non-Public Administration from Ursuline College.

She began her ministry career as a classroom teacher with tenures at Holy Cross (Euclid), Christ the King (East Cleveland), St. Clare (Lyndhurst), St. Jerome (Cleveland) and St. Joseph (Collinwood) where she also served as principal. She left the classroom in 1967 to serve as director of Martin de Porres Center, a social service agency in Cleveland’s Hough area. During a time of volatility and rioting, Sister Joann provided hope and service at the Center.

She followed her years of city ministry with tenures as treasurer at Beaumont School, and Director of Financial Aid at Ursuline College. A lover of community and history, Sister Joann spent several years as congregational archivist, utilizing her organizational skills to chronicle and preserve the Ursuline story and legacy. Her final ministry was to assist in the congregational treasurer’s office.

Joann will be remembered as a woman of deep faith, and as a loyal and loving community and family member. She was always curious, and ever-ready to lend prayerful support and guidance to those she met.  She enjoyed a good celebration and was grateful for the friendships and extended community she enjoyed during her life and her final years at Regina Health Center.

Sister Joann is survived by loving nieces and nephews.

Donations in her memory can be made to the Ursuline Sisters.

Services will be held in the chapel at Regina Health Center

Offer Condolence for the family of Sr. Joann Kessler, OSU

We are pleased to provide for you this grief video series by Doug Manning titled The Journey of Grief. His presentation about the END_OF_DOCUMENT_TOKEN_TO_BE_REPLACED