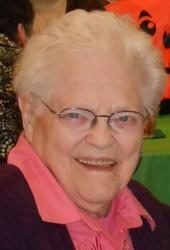 Sister John Vianney had a knack for bringing order to clutter and beautifying it in the process! It was a talent she readily shared throughout her religious life. The creative and faith-filled Ursuline sister died March 21 at Regina Health Center in Richfield, surrounded by Ursuline sisters and friends singing and praying her home. Sister John Vianney, a two-year Regina resident, was to have celebrated her 70th jubilee in April. She was 88.

Mary Jane Marria was born July 1, 1929, in Cleveland, one of six children born to John and Mary (Myers) Marria. The Beaumont School graduate entered the Ursuline Sisters from St. Ann Parish in 1947 and professed final vows in 1953. She earned a bachelor’s degree in education from the old St. John College.

Sister John Vianney began her ministry career as a kindergarten teacher at St. Jerome School, and continued shaping minds and fostering faith with tenures at St. Mary (Mentor), St. Therese (Garfield Heights), St. Ann (Cleveland Heights), St. Mary Magdalene (Willowick), Immaculate Conception (Willoughby) and St. William (Euclid) schools. She concluded her service in education at St. Robert School as assistant to the principal and at Beaumont School where she worked in the library.

She moved to the motherhouse in 1985 and engaged in community service roles, including supervisor of housekeeping services, coordinator of transportation and curator for the Ursuline community. In the latter role she developed and maintained a detailed inventory of the congregation’s antiques and artifacts, information proving invaluable as the sisters prepare for their move to a new residence.

Never one to seek the limelight, she was content to be a behind the scenes worker and supporter.Long-time friend Sister Therese Martin recalled arriving to begin service as the motherhouse superior. Sister John Vianney welcomed her and immediately offered her assistance. “John Vianney was a great help then,” Sister Therese Martin noted, “and continued to be a support for all my endeavors. We supported each other in being our best selves.”

Sister John Vianney cherished her family and friends and found great delight in classical music. She will be remembered as a faith-filled religious, a dedicated teacher and tireless and generous worker. She was a loving sister, aunt and friend.

She is survived by sisters-in-law Elaine Marria and Tina Marria, and nieces and nephews. Brothers John, Harold, Edward and Philip and a sister Ruth Elizabeth preceded her in death.

Donations in her name may be made to the Ursuline Sisters.

Chapel of the Most Holy Trinity (Motherhouse)

Chapel of the Most Holy Trinity (Motherhouse)

We are pleased to provide for you this grief video series by Doug Manning titled The Journey of Grief. His presentation about the END_OF_DOCUMENT_TOKEN_TO_BE_REPLACED