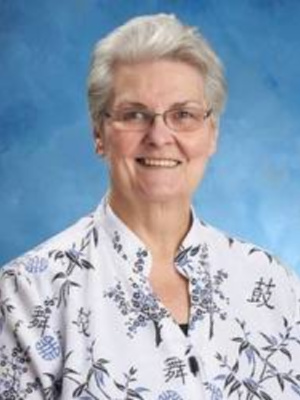 “I am dependent on God for the help I need to do all of the things I would never be able to do without His help.” Sister Madonna wrote these words forty-eight years ago as she requested to profess her vows in perpetuity.  Never were they truer than when she faced her final months completely dependent on God and the people that divine love placed in her path.

Madonna Mae Dickus was born in 1947 to Florence Mae (Parsch) and John and was the younger sister of Ralph. She was baptized at St. Philip Neri Church and confirmed at St. Patrick Church (Bridge Ave.) where she attended elementary school and from which she entered the Ursuline Sisters in 1966. Her pastor affirmed her call, stating that “she would make an excellent candidate for the religious life.”

Sister Madonna Marie attended Dyke College and Ursuline College for undergraduate degrees.  She later graduated from Kent State University with a Master’s Degree in Vocational and Business Education, a rarity in the congregation. After ten years of teaching business classes at Villa Angela Academy, she became the Treasurer at Beaumont School.  Finally, her active ministry found her serving the congregation in a variety of roles: in the Development Office, as Office Manager for the congregational leadership, managing the community cars and assisting at Merici Crossings in a variety of ways.

Cataloguing ministries is only the beginning of celebrating the gift of Sister Madonna’s life.  She was a caring, creative and charming woman sharing loyalty, love and laughter with sisters, family, friends and former students until she breathed her last. Friends recall sharing meals, travels and extended family with her.  Her magnetic personality drew others to her side, and she could not do enough for them.  Many years of faithful pet service warmed her heart and the hearts of others.  Giving away her artwork was a mark of her generosity and generativity. Sister Madonna was faithful to her promises to others throughout her life as well as to the vows she made in her youth and kept in her too brief, elder years.

Those who knew Sister Madonna marveled at her ability to accept physical pain and to persevere in the face of it.  Even with two broken arms, she was determined to live her life as independently as possible.  Never fully recovering from her catastrophic fall, she assented to moving to Regina Health Center, especially because her faithful friend Sister Ann Whitely accompanied her as a new Regina resident.

Sister Madonna slept peacefully into the loving arms of her God at Regina.  We can hear her beautiful voice once again, strong and clear singing, “Did I fill the world with love my whole life through?” We acclaim a resounding “Yes” as we affirm her life and goodness.

Join us as we pray for Sister Madonna and her family.  She is survived by her sister-in-law Fran Dickus and her nephew Ron Dickus as well as cousins.

Memorial donations may be made to the Ursuline Sisters of Cleveland: https://www.ursulinesisters.org/support-us/donate

Offer Condolence for the family of Sr. Madonna Dickus, OSU

We are pleased to provide for you this grief video series by Doug Manning titled The Journey of Grief. His presentation about the END_OF_DOCUMENT_TOKEN_TO_BE_REPLACED