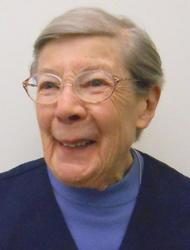 Regardless of where she resided at any point in time, Sister M. Eugene’s heart was always in the city. Though small of stature and soft of speech, she was an untiring advocate for the poor and underservedthroughout her 75 years of ministry. The former teacher, principal, congregational leader, librarian and program director, died May 4 at Regina Health Center in Richfield after suffering a stroke. She was 95.

Interspersed with her school assignments, Sister Eugene served as program director at Martin de Porres Center; served two terms on the Ursuline Sisters’ leadership team and, near the end of her active career,initiated and directed an after-school program at Cleveland’s Woodhill Housing Development. In 2015, at the age of 90, Sister Eugene took up her final assignment in the ministry of prayer. She moved to Regina Health Center in January 2018.

Sister Eugene will be remembered for her tireless service and her love of the community. She was a committed and faith-filled religious, a dedicated educator and champion of the poor, a loving aunt and a loyal friend.

She was preceded in death by her parents, brothers Barry and Robert Gear, and sister Irene O’Donnell. She is survived by nieces and nephews.

Donations in Sister Eugene’s name may be made to the Ursuline Sisters.

Offer Condolence for the family of Sr. Marjorie Gear, OSU

We are pleased to provide for you this grief video series by Doug Manning titled The Journey of Grief. His presentation about the END_OF_DOCUMENT_TOKEN_TO_BE_REPLACED