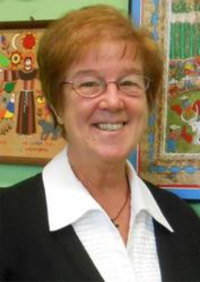 Linked by Bands of Joy

In this world or in others, wherever you lead me,

it is You, the one companion of my endless life

who links my heart with bands of joy to the unfamiliar.

The title above and the quotation from Tagore were Sister Roberta Goebel’s choices when she wrote her final reflections to the folks back home at the end of her service in El Salvador. Joy and profound faith characterized this Ursuline Sister, a woman who was daughter, sister, friend, teacher, pastoral minister, administrator, missionary and so much more. Titles and roles fail to convey the commitment, energy, creativity and deep love of this beloved woman known as Bobbie, Sister Mary Aquinas, Sister Roberta and Madre.

Sister Roberta was a woman of many gifts. Those who served with her recall her energy and enthusiasm, her boundless love of children, her commitment to seeing a process to completion and her strategic planning which always involved alternate approaches. Sister Roberta would never ask anyone to do anything that she would not do herself, pitching in as part of the team and always adding an element of fun.

She taught at Christ the King School, Our Lady of Peace, St. Jerome, St. Mary Magdalene, St. William and St. Francis De Sales. While at some of these sites, she also served as Assistant Principal and Religion Coordinator. From there it was natural for her to also lead and guide as principal at St. William School, Christ the King, Immaculate Conception (Cleveland), St. Anthony of Padua, St. Lawrence (California) and St. Charles. Her many skills and talents also led to pastoral ministry work at St. Anthony of Padua as well as diocesan work as Co-Director of Vocations and in the Diocesan Mission Office.

Service in the diocese was not enough for Sister Roberta. The martyrdom of Sister Dorothy Kazel in El Salvador initiated a process of reflection that led to a request to serve on the Cleveland Latin American Mission Team. After a visit to the country she said, “I just fell in love with the people.” This combined with her spirituality led to the letter in which she asked to become a missionary and wrote, “Jesus has blessed me with so much love – my family, my friends, my community – I want to share that love of Jesus.”

In recent years, a debilitating illness led to an eventual move to Regina Health Center, but only after devoted efforts by her good friend, Sister Martha Owen, to keep her engaged in ministry to her local community for as long as possible. Even as the demands of her body and mind took her away from us bit by bit, her beautiful smile and great joy in being with the sisters was a final gift that has touched all of us.

Sister Roberta once had to take the body of a deceased father from the coffee fields of El Salvador to his wife. She said that this experience put her into a kinship with Mary when she received the body of Jesus from the cross. When Sister Roberta died at David Simpson Hospice House, the community and her family received her in love, and we now surrender her into the arms of the God who loves her more profoundly than we can even imagine.

Sister Roberta was preceded in death by her parents, Joseph and Julia, and her siblings, Father Joseph Goebel, Dorothy (Chuck) Allanson, Robert Goebel and Joan (Robert) Jones. She is survived by her sisters, Kathryn Goebel and Mary Alice Enright (Harold, deceased) as well as nieces and nephews.

Memorial donations may be made to the Ursuline Sisters of Cleveland by CLICKING HERE.

Offer Condolence for the family of Sr. Roberta Goebel, OSU

We are pleased to provide for you this grief video series by Doug Manning titled The Journey of Grief. His presentation about the END_OF_DOCUMENT_TOKEN_TO_BE_REPLACED