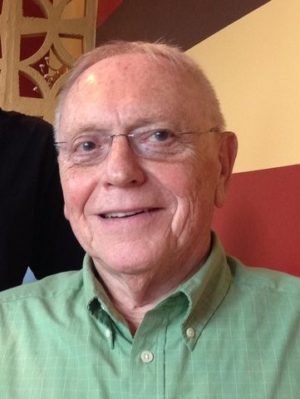 After graduating from Cleveland Heights High School in 1963, he received a B.A. in English from Hillsdale College of Michigan in 1967 as well as an M.A. in Metaphysical Poetry from Ohio University of Athens, Ohio in 1968. He then started his career as an English teacher and professor at Mentor High School and Lakeland Community College in Painesville, Ohio.

In 1971, life took a turn and he began a lengthy career as President of Hanna Parking Company in downtown Cleveland. He devoted much of his time to many professional associations including the Cleveland Parking Association, the National Parking Association, and to The Rotary Club of Cleveland, in which he proudly served as President in 1991 and 1992. He also served as a Deacon at Fairmount Presbyterian Church in Cleveland Heights.

After moving to Chesterland in 1995 and retiring from Hanna Parking in 1999, Ted dabbled in commercial real estate but really only found his passion after beginning a new career at A Dog’s Life of Chesterland as founder and owner. Ted’s greatest joy for almost sixteen years was in sharing his knowledge and expertise with both dog and cat lovers from throughout the greater Cleveland area.

As many may also know, Ted was an avid model train hobbyist and member of the National Model Train Association. He loved designing and building elaborate railway layouts including a memorable Christmas display in 1981 at the Halle Brothers Co. department store in Cleveland’s Theater District. He was also a talented artist, musician, and woodworker, whose creativity sparked joy and imagination in all.

A grandfather to six, Ted took great pride in each of their academic, artistic, athletic, and professional accomplishments and hoped they would follow in his footsteps in pursuing their passions. Mary was the love of his life. High school sweethearts, they married in August 1966 and shared a dream of creating careers that revolved around dogs, which they did! Their deep and long commitment with each other was bound in love, trust, and faith.

In lieu of flowers, contributions may be made in memory of Ted to your favorite animal rescue organization.

Family will receive friends to pay tribute to and celebrate the life of Ted at THE DeJOHN FUNERAL HOME & CELEBRATIONS CENTER OF CHESTERLAND 12811 CHILLICOTHE ROAD (Rt. 306, just south of Mayfield Rd.) SATURDAY, February 8, 2020 from 1-4 PM.

Offer Condolence for the family of Theodore Berr

We are pleased to provide for you this grief video series by Doug Manning titled The Journey of Grief. His presentation about the END_OF_DOCUMENT_TOKEN_TO_BE_REPLACED