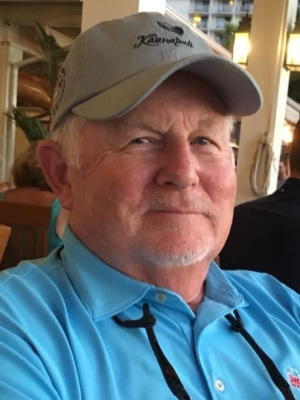 Thomas Russell Maier died peacefully after a long battle with melanoma on September 10, 2020.  He was born on September 18, 1947, to Russell and Marjorie (nee Durk) Maier who preceded him in death. He grew up on the west side of Cleveland, graduating from John Marshall High School.  Tom attended Bowling Green State University where he majored in English and was a member of the Sigma Chi Fraternity.  He also met Billie Himburg, whom he married on December 20, 1969. After a few years teaching high school and coaching football, Tom switched to his life’s work: sales.  He worked for Xerox Corporation for thirty-four years in Michigan, Wisconsin, and Ohio.  Outside of work, Tom was passionate about music, golf, travel, and sports. He especially enjoyed cheering on the Michigan State Spartans and his Cleveland teams: the Indians and Browns. More than anything, Tom valued relationships.  He and Billie were married for over 50 years, and he was a devoted father to their two sons.  He took particular joy in his role as grandfather to his eight grandchildren.  He had a wide circle of friends, many of whom were his friends for multiple decades. His family and friends will all remember him for his loyalty, constancy, and generosity. Throughout his illness, Tom found great meaning and comfort in his faith.  He and his family are also grateful for the excellent care he received from the doctors and nurses from The Cleveland Clinic’s Oncology Department.

In Lieu of flowers, contributions may be made in memory of Tom to Gross Family Melanoma Research Fund at the Cleveland Clinic https://give.ccf.org/give/196607/#!/donation/checkout

Relatives and friends are invited to meet for the Mass of Christian Burial Thursday, September 17, 2020 at 11 AM at St. Raphael Catholic Church 525 Dover Center Rd. Bay Village, OH 44140, a live stream of the Mass can be viewed here. Cremation following by DeJohn Crematory. Sigma Chi White Rose Ceremony will be live streamed below on Wednesday, September 16, 2020 at 7 PM.

Offer Condolence for the family of Thomas Russell Maier

We are pleased to provide for you this grief video series by Doug Manning titled The Journey of Grief. His presentation about the END_OF_DOCUMENT_TOKEN_TO_BE_REPLACED