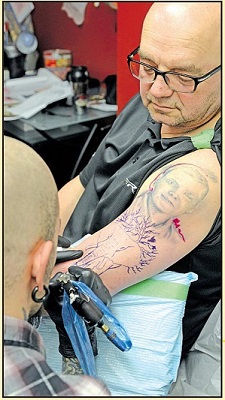 Memorializing loved ones with a piece of body art is becoming an increasingly popular way of coping with grief. for a parent struggling to come to grips with the pain and anguish of losing a child, body art offers a unique way to honour the memory of a life left unfinished. lionel hawryliw of north Battleford is getting a tattoo at tantrix Body art in memory of his son, nico, who died in 2011 at the age of 19. actually, it is a third tattoo in remembrance of nico and his seven-year struggle against cancer.

hawryliw’s original memorial tattoo took five and a half hours to complete on a sunday night in early 2011. Mike thompsonhill, co-owner of tantrix Body art on central avenue, fit him in because he knew that hawryliw’s tattoo had a time crunch.

“i got it before nico passed away. he saw it. he liked it,” hawryliw pauses. “it’s still emotional.”

the new tattoo includes an elephant and a tree. the tree is for the real tree nico’s school planted in his memory. the elephant is for the intricate elephant wood carving nico did in woodworking before he died. the carving still hangs in his parents’ house.

“i do a ton of memorial tattoos,” said thompsonhill, who’s been creating body art for 18 years. “i’ve never had to get a memorial tattoo but it obviously helps people in some

way.” he added that his clients sometimes see it as therapy.

thompson-hill’s wife and co-owner of tantrix, leanne, encourages clients to be creative with their memorial tattoos – including elements of their lives together, shared experiences or favourite pastimes.

the elephant and tree will sit below nico’s portrait and below the sleeve line, which is what hawryliw wants – something others can see.

“i’m a golfer, not a sunbather, so unless i pull my sleeve nobody knows i have [nico’s portrait],” hawryliw explained. the new art will definitely get noticed.

“it’s really touching, what we do for them, because a tattoo is a forever thing,” said leanne. “Because something so dear to them has been ripped out of their lives and it’s so unfair that it’s been taken away from them, we give them something that no one else can take away from them.”

hawryliw is now planning another memorial tattoo to honour the memory of his father who died in 1965, when hawryliw was just nine years old. the tattoo will commemorate his father’s contribution to d-day during World War ii with a maple leaf and a canadian military helmet.

We are pleased to announce the nine local students we have awarded with our Ross Sr. & Carmella DeJohn END_OF_DOCUMENT_TOKEN_TO_BE_REPLACED

Dear Ross & DeJohn Funeral Homes,Thank you so much for your help and kindness, your thoughts and your END_OF_DOCUMENT_TOKEN_TO_BE_REPLACED

Dear Ross and staff,We want to thank you especially… Words cannot express how much we appreciate all the END_OF_DOCUMENT_TOKEN_TO_BE_REPLACED